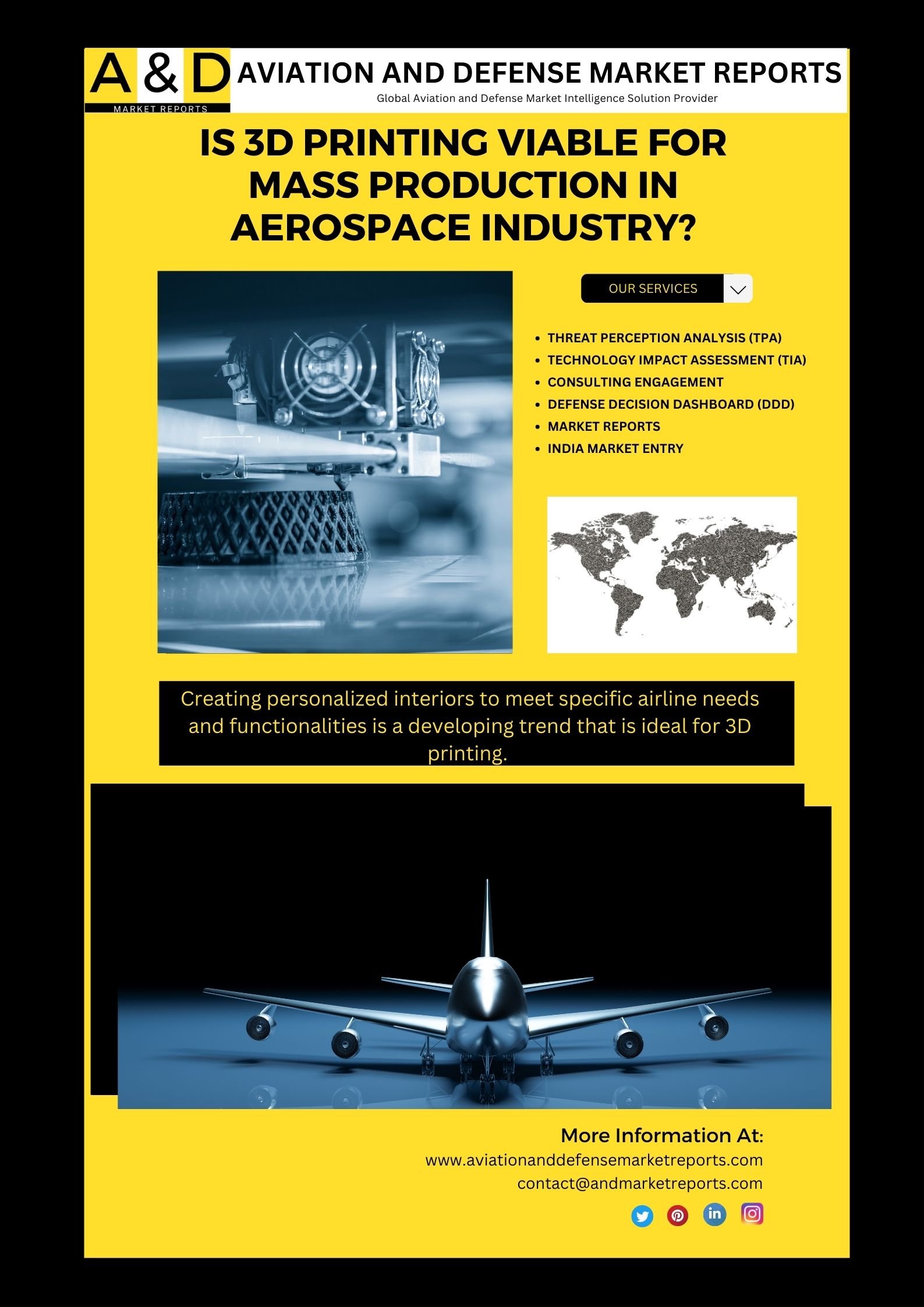 3-D printing, whether with plastic, metal or even living tissue, has been around since the 1980s.It has primarily been used for prototyping. And, for the time being, it is still cheaper to manufacture most large-volume consumer goods, such as bottle caps, using traditional processes. 3D printing, also known as additive layer manufacturing, is capable of producing metal printed parts for the entire range of Airbus aircraft that are lighter, stronger, and potentially significantly cheaper to produce. 3D printing is the process of creating a three-dimensional object from a computer file.

While a 2D printer, like any standard photocopier, reproduces a text or image on paper by laying down toner on the surface, 3D printing adds a critical new layer height. Instead of ink toner, the 3D printers here use powder from various metals including titanium, steel, and plastics that can be found on brand-new aircraft.

Several hundred 3D printed parts fit onto a modern aircraft, and thanks to 3D printing, it takes 70% less time to make the parts and the manufacturing cost dropped by 80%. The aerospace sector is now at the beginning of the revolution for 3D printing.

Understanding the scope of the benefit it can bring to the aircraft as a whole costs aside, there are huge advantages with 3D printing there’s up to 95 percent less metal waste which is great for the environment as all the metal needed to make parts is used and like with traditional milling the turnaround time to make parts can be as little as 24 hours. Slashing the need for large stocks means far more agile factories and far more elaborate parts can be developed with great precision.

The most intriguing aspect is the reduction of costs by 25-30%. Another significant benefit is retrofitting, rebuilding would have cost thousands of dollars and been time-consuming. Instead manufacturers simply 3D print the parts to be fitted on an aircraft. The benefits of 3D printing are significant; obtaining spare parts fast is just a printer away, and lighter, stronger parts on board imply big weight savings and cheaper fuel expenses in the long run. Aerospace 3D printing may cut the weight of each aircraft by more than a ton for airlines. The most notable benefit is the weight reduction from the aircraft, which results in significant cost savings and increased fuel efficiency.

Aircraft manufacturers and airlines are searching for faster, cheaper ways to create bespoke routes for our cabin innovation has been at the heart of airline business objectives.

Not only is 3D technology widespread over the world, but it has also been labeled the fifth manufacturing revolution. SLS, or selective laser sintering, is another step that offers lighter components, faster manufacturing, and multiple paths to be produced at the same time. Everything a passenger sees in the cabin could be printed one day.

Airlines are constantly looking for methods to improve their customers’ flight experiences, and cabin design plays a vital role in this. Creating personalized interiors to meet specific airline needs and functionalities is a developing trend that is ideal for 3D printing. Because it does not necessitate costly tooling adjustments depending on individual demands, aerospace 3D printing opens up new possibilities for customizing cabin sections. Custom part production is thus more efficient and cost-effective. Predicting spare part needs is difficult because sometimes a spare part is no longer in production. While high inventory levels help save aircraft downtime, they also result in astronomically high maintenance costs. Ever evolving software for 3D printing enhanced by AI will further drive the aerospace 3D printing market.

Producing the structure and engines of rockets using 3D printing, artificial intelligence, and autonomous robotics, drastically lowering touch points and lead times, streamlining the supply chain, and enhancing overall system reliability. Software for 3D printing and data-driven production, 3D printed materials, and unusual design geometries that are not conceivable with traditional manufacturing are propelling the industry forward at a quicker rate of compounding innovation and iteration.

According to the Aviation and Defense Market, Relativity’s first rocket is ready to launch from Launch Complex 16 at Cape Canaveral in Florida. When that happens, which might be later this month, Over 85% of the rocket’s mass is 3D printed, lowering the number of parts and labor required to produce one of these vehicles over time. Relativity claims it can build a Terran rocket in two months, as opposed to two years for certain conventionally produced rockets. Because you instruct the printer to create a scaled-down model, the pace and expense of creating a prototype—say, for wind tunnel testing—are lowered. Because the process is additive, there is minimal waste. If something needs to be changed, 3D printer can be reprogrammed rather than retooling, which is time-consuming and expensive in case of the traditional method.

Although 3D printing has the potential to transform mass production, there are still significant obstacles to overcome. Some parts may be difficult to mass-produce using 3D printing because tolerances are not as precise as with older processes such as CNC machining and injection molding. Although 3D printing has become more popular in recent years, many product teams lack the necessary competence to make the most of these technologies. After all, the concept of employing 3D printing for mass production is still relatively new, so many businesses encounter certain challenges while navigating high-volume 3D printing for the first time. Although additive manufacturing has value, its possibilities are limited without larger (capital) equipment.