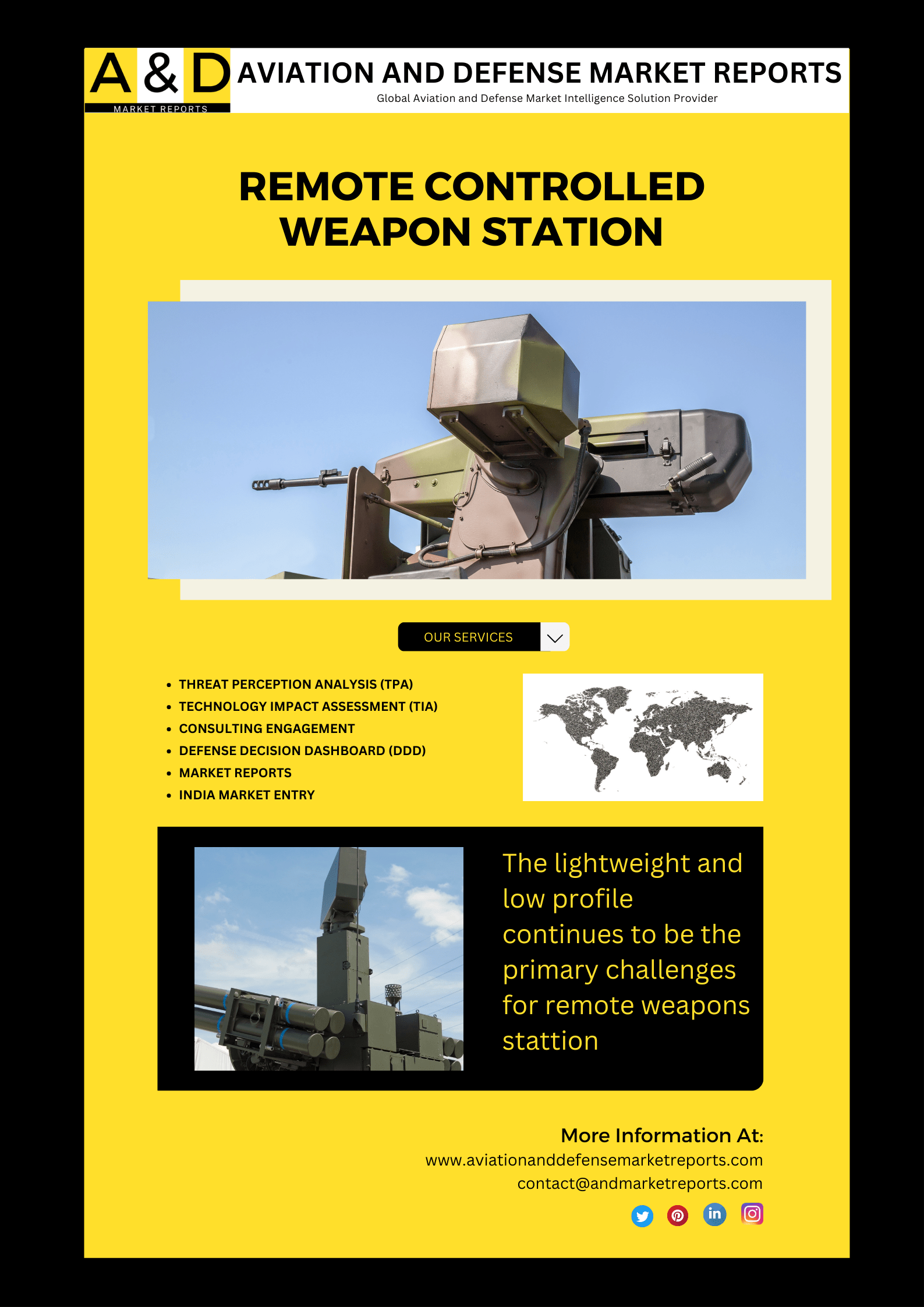 A remote-controlled weapon station (RCWS), also known as a remote weapons station (RWS), is a remotely operated weapon system that is frequently equipped with a fire-control system for light and medium caliber weapons and can be installed on ground wheeled and tracked combat vehicles, as well as tactical vehicles, light vehicles, and trucks. Such technology is employed on current military vehicles because it allows the gunner to remain in the vehicle’s relative safety. The proliferation of unmanned vehicles is generating significant demand for RCWS. Nations are resorting to unmanned platforms for roles such as border patrol, ISR, and Counter drone operations.

Rosoboron export, a state arms export firm, shows off a powerful remote operated weapon station (ROWS) called 32V01, which is manufactured by JSC CRI Central scientific research Centre BUREVESTNIK. On each side, the remote-controlled weapon station is armed with a 2xA42 30-millimeters Auto Cannon, a 7.62-millimeters coaxial machine gun, and smoke grenades. Other weapons, like 12.7 millimeters, can also be substituted depending on the task. The ROWS can be placed on any tracked or wheeled combat vehicle. Because of its fully automatic stabilized cannon and sophisticated Fire Control System, it can engage all types of targets, including armored vehicles. The 32V01 remotely operates weapon station (ROWS) is used on the Russian Airborne Force Typhoon VDVK-4386 mine-resistant armored vehicle. The 32V01 remote controlled weapon station is intended for use against enemy personnel wearing individual body armor. When mounted on Armored Combat Vehicles, the turret serves as the primary armament system.

Due to the usage of a weapon system with a modern Fire Control System shooting ammunition with controlled remote detonation option, the turret integrated into a combat vehicle boosts combat effectiveness. JSC CRI Central scientific research institute burvestnick is a Russian armaments industry business headquartered in Nizhny Novgorod, Russia. I\The Typhoon VDVK-4386’s design is typical of a modern 4×4 armored vehicle, with the engine in the front, the crew in the middle, and the troops and cargo compartment in the back. The remotely operated Weapon Station on the roof of the Typhoon VDVK-4386 is armed with a 130 millimeters two A4 Cannon system and a 7.62 millimeters machine gun. Above the main cannon is an EO suite that comprises day and night vision infrared cameras as well as a laser rangefinder.

India’s Silent Sentry is a 3D-printed scout robot that runs along security fences to ensure perimeter integrity and responds quickly to intruder alerts. The AI-assisted weapon system is a remotely controlled weapon station that can engage human/vehicle targets at a range of 300 meters in both daylight and darkness. The enhanced target acquisition system employs cutting-edge object identification and recognition algorithms. Deep learning and feature-based trackers are at the heart of high-end target-tracking algorithms. Multiple targets can be tracked at the same time, each with its own unique Id.

China unveils the LD-3000 Close-In Weapon Station, which is identical to the US C-RAM Centurion Phalanx. The CIWS is made out of a remotely controlled turret armed with an 11-barrel 30mm Gatling design and mounted on a two-axle vehicle. The LD-3000 is a C-RAM (Counter Rocket Artillery and Mortar) system designed to defend critical sites against aerial threats such as low-flying helicopters, fixed-wing aircraft, and cruise missiles. The LD-3000 is equipped with the Naval version of Type 730 seven-barreled 30 mm Gatling gun/Rotary cannon CIWS (Close-In Weapon Station), which is deployed on ships to provide air defense against anti-ship missiles and other precision-guided weaponry.

The optimization of RCWS’s design to increase operational flexibility, reduce size and weight, and improve dependability would improve the operational efficacy of both manned and unmanned platforms. The increasing proliferation of loitering munitions and UAVs will increase the demand for air defense remote-controlled weapon systems.