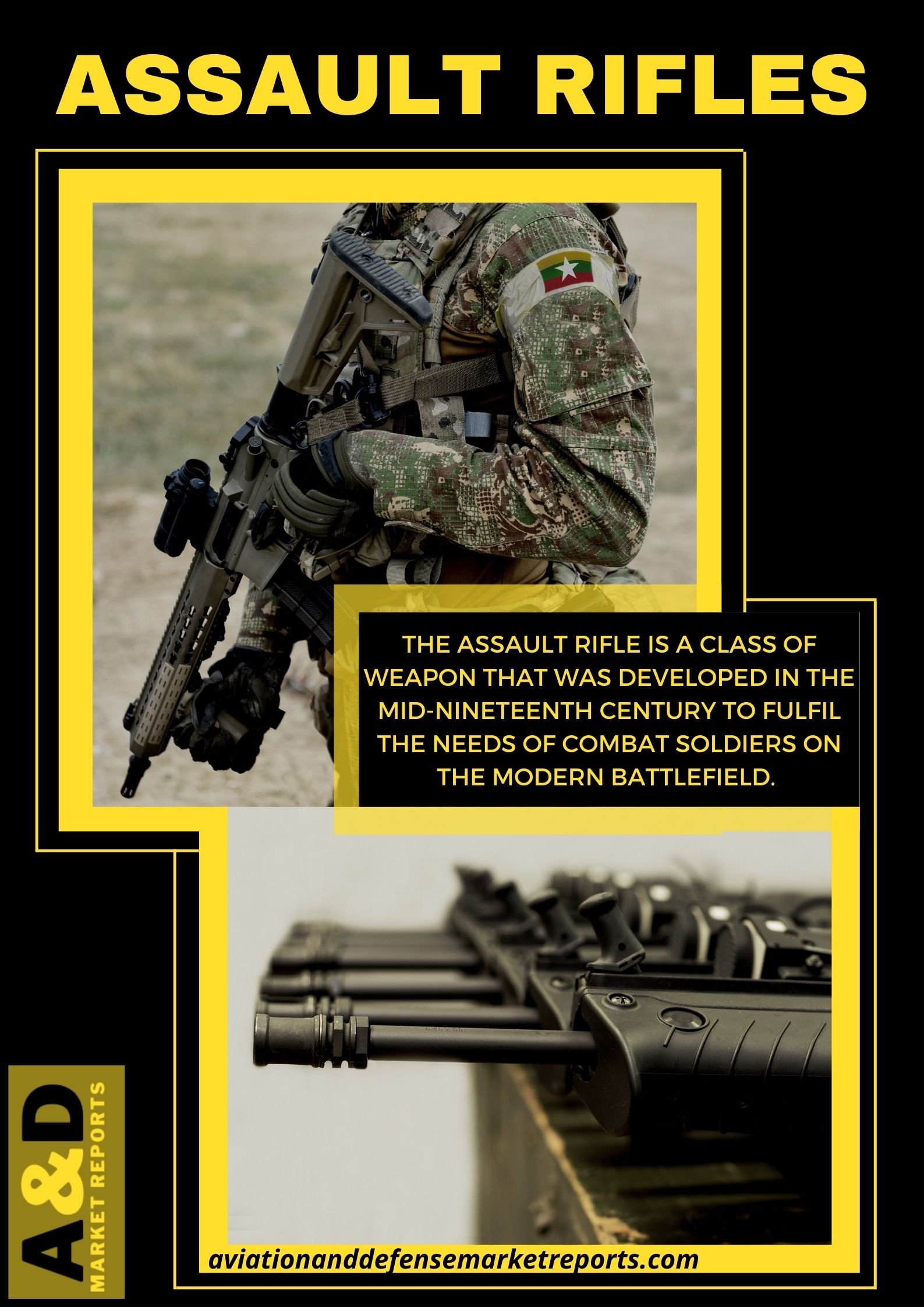 The assault rifle is a class of weapon that was developed in the mid-nineteenth century to fulfil the needs of combat soldiers on the modern battlefield. European and American weapon designers worked on making firearms more accurate across longer distances. They began by devising methods for making rifles easier to load from the front. Then they figured out how to load firearms from the back—the breach—rather than forcing bullets down the gun’s muzzle. Breach loading firearms can be loaded faster, and the technique allowed for the development of a magazine that could hold numerous bullets.

In the First and Second World Wars, these sorts of battle rifles culminated in the firearms carried by the vast majority of foot soldiers. Large rifles were overpowered and inconvenient to use. They didn’t fire quickly or for long enough. Soldiers desired a weapon that could fire on automatic rather than machine guns, which still used large-caliber ammo and required something large and heavy to absorb recoil. The submachine gun, which is a machine gun that fires pistol ammunition rather than rifle ammo, was a popular option during the First World War. Smaller, weaker ammo allowed for a smaller, lighter rifle, but at the cost of mediocre range and minimal penetrating force. Many militaries considered large rifles and submachine guns to be complimentary weapons, and squads would fight with both. A middle round, which was neither too huge nor too small, was a superior option. The lighter and smaller the gun is, the less powerful the ammo, and the easier it is to fire it precisely, especially when firing automatically. Smaller ammo allows for more ammunition to be packed into a magazine and carried into combat. However, the ammo may not be as ineffective as pistol ammunition. It needed to be large and powerful enough to be accurate and lethal at reasonable ranges.

The M16 series assault rifles are the preferred weapon of the United States Armed Forces, one of the world’s most powerful armies. They are chambered for NATO 5.56x45mm ammunition. Over eight million M16 rifles have been sold to 15 NATO countries and more than 80 other countries. The M16 models are used by the US Army, Navy, and Marine Corps, with the M16A4 being the most recent to enter service during Operation Iraqi Freedom. The M4 Carbine is a shorter variant of the M16A2, which is used by the majority of US Army combat troops. The M16A4 weights 3.26kg and has a detachable carrying handle as well as a rail mounting system for mounting optical sights and other auxiliary devices.

The Russian Army’s main issue assault rifle is the AK-74M, an enhanced version of the AK-74 5.45mm rifle. Afghanistan, Armenia, Belarus, Bulgaria, Georgia, Jordan, Kazakhstan, Kyrgyzstan, Moldova, Mongolia, North Korea, Tajikistan, Turkmenistan, Ukraine, and Uzbekistan all have AK-74Ms in service. The rifle has a dove-tail side rail for adding optical and night sights, and it can be equipped with a grenade launcher or a bayonet under the barrel. In cyclic fire mode, the brake ensures accuracy while also reducing muzzle climb and burst recoil. High-strength plastic is used for the forearm, magazine, shoulder stock, and pistol grip, while metal components are protected with corrosion-resistant coatings. With a loaded magazine of 30 rounds, the rifle weighs 3.9kg.

The Next Generation Squad Weapons (NGSW) Program is an iterative prototyping initiative that uses Middle Tier Acquisition Authority to produce operationally relevant, squad-level lethality to address growing threats while taking Soldier feedback into account. The Rifle (NGSW-R) and Automatic Rifle (NGSW-AR) with a shared 6.8mm cartridge, as well as Fire Control (NGSW-FC) between the two systems, are part of the NGSW prototype effort. The NGSW-R is expected to be fielded to the Close Combat Force (CCF) as a replacement for the M4A1 while the NGSW-AR is expected to be a replacement for the M249 Squad Automatic Weapon. At the squad level, the NGSW programme is expected to greatly boost lethality and hit probability. The 6.8mm projectile will outperform even the most contemporary 5.56mm and 7.62mm ammunition due to the nature of General Purpose ammunition. Soldiers will benefit from major increases in accuracy, range, signature control, and lethality thanks to these weapon systems. The NGSW-R, NGSW-AR, NGSW-FC, and 6.8mm ammunition will be interoperable with all already fielded enablers while also providing an open Adaptive Soldier Architecture (ASA) to integrate with developing enabler programmes, however specifics are competition sensitive.

Last July, Moscow and New Delhi signed a contract in which India would manufacture the AK-203 assault rifle as part of a joint venture, the Indo-Russian Rifles Private Limited, as part of India’s aspirations to build more military gear domestically. Outside of Russia, India would be the first country to start producing the AK-203.The 7.62x39mm cartridge is chambered in the gas-operated, magazine-fed, select-fire assault rifle, the same ammunition used in the ubiquitous AK-47 and AKM assault rifles, which were reputedly created by Mikhail Kalashnikov during the early phases of the Cold War. The AK-203 is a type of assault rifle. The AK-203 is the most recent assault rifle in the AK series, and it’s an enhanced variant of the AK-103, which Kalashnikov created in 1994.