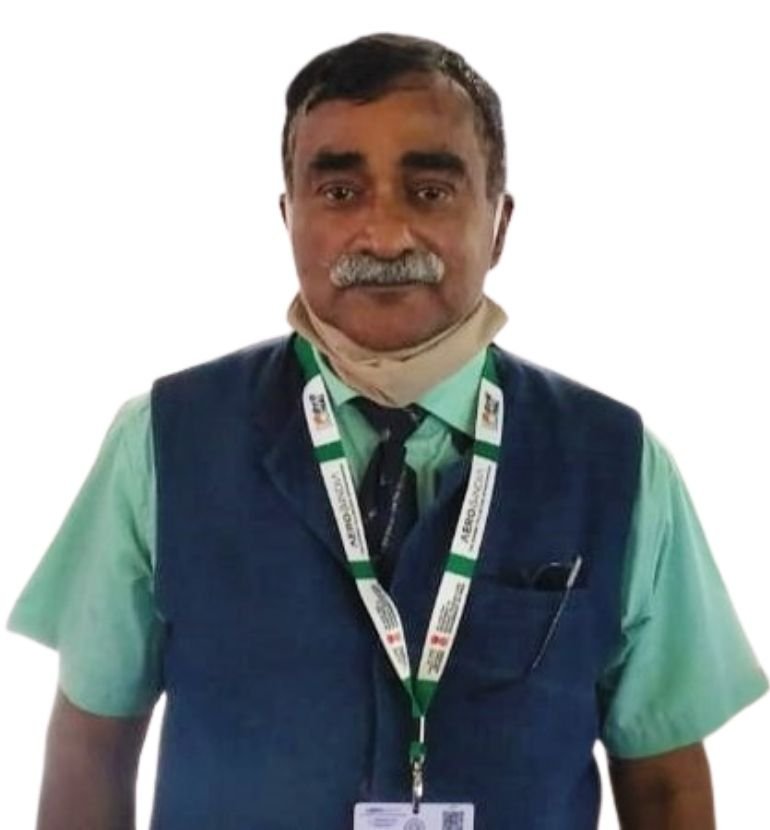 His portfolio includes performing airworthiness certification in abinito aero engine project for helicopter, approval coverage in repair schemes development, and indigenous development of airborne spares. He is also a member that resolves the production and quality issues of helicopters and their engine during the process of manufacturing or assembly.

He was an instrumental member in ensuring quality and testing along with resolving reliability issues during service operations.

Dr John has also partaken in design, audit, and review of abinitio projects including transfer of technology clearances. He also envisioned and was a member of a team that formulated a vision document for the indigenous design and development of helicopter engines in India. He subsequently has assisted in the Design Review of the 1200 kW engine program. Currently, he resides in Bengaluru.

Military and air force transport aircraft are far superior to the competition for their platforms since they come in all sizes and types. Since the 1780s, airplanes had evolved, and the military had a proven record of adopting the latest innovations and designing transport aircraft military that could help it achieve its objectives. In the beginning, hot air balloons and hydrogen balloons were the means of transportation. Military stealth aircraft differ from commercial or private aircraft in their designs and functions.

Military fixed-wing aircraft can perform for both combat and non-combat missions. The weapons on combat aircraft aim to destroy enemy equipment. In non-combat planes, there are weapons to defend themselves. All military fixed-wing aircraft fall into one of these categories. The bombers are heavier and less maneuverable craft that drop bombs and missiles on surface targets. The round-attack or ground-support transport air force transport aircraft fly at a lower altitude than bombers. To transport weaponry, supplies, and troops over long distances, tanks, and cargo planes have large bodies and plenty of interior space.

Fixed-wing fighter aircrafts are used in combat primarily to destroy enemy aircraft while they are in the air. These air force transport aircraft employ equally defensive and offensive counter-air operations, but some fighters can also deal with ground strikes. These aircraft are equipped with machine guns, rockets, bombs, cannons, and guided missiles, among other weapons, depending on the mission. Today’s fighters can engage the enemy from a great distance, often before the adversary detects or sees them. Only some version of F-15 is mildly stealth, Su-27 not stealth. Fighter aircraft must possess superior manoeuvrability, speed, and a smaller size than other types of fixed-wing combat aircraft.

A military bomber is a fixed-wing aircraft that is larger, heavier, and less flexible than a fighter aircraft. In addition, these aircraft carry a variety of military weapons, including cruise missiles, bombs, and torpedoes. Military bomber planes primarily target the ground for ground attacks. They lack both swiftness and agility to confront the enemy directly.

Military bomber planes might have a single-engine and a single pilot, or they might have two or more engines and a large crew. Northrop Grumman’s B-2 Spirit, for instance, is a combat bomber with stealth capabilities. As a result, hostile radar cannot detect them. Other examples of these planes are the B-52 Stratofortress and the B-17 Flying Fortress from World War II. There are several types of bomber planes, including light, medium, and heavy bombers, torpedo bombers, and dive bombers. Junkers Ju 88 and Tupolev Tu-16 Badger are other examples.

Fixed-wing aircraft primarily transport aircraft military, equipment, and troops from one location to another. Pallets assist in loading and unloading easier. Sometimes, cargo is dropped from planes via parachutes, eliminating the need for planes to land. Aerial tankers are planes that refuel other planes while in the air. Transport aircraft military include the C-17 Globemaster III, the Douglas C-47 Skytrain from World War II, and the KC-135 Stratotanker.

Multi-role fixed-wing aircraft are capable of performing multiple missions, including combat and bombing. Their exact role depends on the mission requirements, and they are common in today’s armed forces. As well as forward air control, aerial surveillance, and even electronic warfare, these multi-role air force transport aircraft can also perform other missions. Despite being able to attack from the ground, most fixed-wing aircraft are used primarily for air attacks.

Military multi-role stealth aircraft include the Eurofighter Typhoon, Dassault Rafale, Saab JAS-39 Gripen, and Junkers Ju 88. Multi-role aircraft are also known as swing-role planes because they can change roles rapidly within the same mission, often with little to no notice. These include air interdiction, close air support (CAS), and suppression of enemy air defense (SEAD).

The United States Air Force has maintained its force structure at around 5,500 air force transport aircraft despite a steep decline from 2002 to 2009. By allowing the average ages of aircraft to increase to 29.2 years, the Air Force has kept its inventory in check. Some fleets are in good shape. The modernization of older fleets is underway, but it has stalled, is expensive, and may take years to complete. As a result of the acquisition of C-17s and C-135, the transportation fleet has an average age of 21 years, and the special operations fleet has an average age of 12 years.US stealth aircraft and bombers US have designated an all new standard for the global aircraft market.

The United States Air Force purchases new aircraft every year, including F-35 Joint Strike Fighters, KC-46 tankers, and T-7A trainers. The procurement level for FY 2021 is substantially too low to maintain the Air Force’s current inventory. In the fiscal year 2021, the Air Force will buy 106 aircraft. It is possible to service 3,180 aircraft over 30 years. Currently, there are 5,387 assets in inventory. To maintain such quantities, the number of aircraft purchased annually must roughly double. The Air Force is developing a new stealth bomber, US under the B-21 Raider program. In 2018, an evaluation of the B-21 program. Northrop Grumman is currently building the first B-21 bomber, which will be ready in 2022. The US Air Force plans to buy at least 100 B-21 bombers, with a procurement program of record size.

The KC-46 will replace the Air Force’s 58- and 35-year-old KC-135 and KC-10 tanker fleets. Because the airframe derives from Boeing’s 767, the program is low-risk. Nevertheless, the program has faced delays from the outset, with the first shipment arriving three years late in January 2019, and further delays continue to occur.

The KC-46 program is still in development, so the current fleet of KC-10s and KC-135s are expected to be in service for a long time. In general, the United States Air Force has plans in place to modernize its fleets, but these plans are being delayed and taking time, which means today’s aging fleets will continue to operate for a long time. The conditions of each fleet are unique and require individual attention.

One of the top goals of the Defense Department’s modernization roadmap is to maintain US battlefield superiority through hypersonic systems. Hypersonic US stealth aircraft travel at speeds approaching or exceeding Mach 5, or five times the speed of sound. In the upper atmosphere, up to 200,000 feet in altitude, the Department of Defense can manoeuvre unexpectedly using aerodynamically controlled vehicles. Currently, the Department of Defense is investing in its industrial base, personnel, and supporting technologies.

A rotorcraft often referred to as a rotary-wing aircraft, is a heavier-than-air force transport aircraft with rotor blades that rotate around a vertical mast to generate lift. Rotor blades mount on a single mast as a set. Rotorcrafts, such as military transport helicopters, have one or more rotors that provide thrust during flight. As early as the Korean War, the chopper delivered a substantial contribution to military operations, but more than anything else, Vietnam was the place where it truly matured. In addition to transporting infantry units, troops could transport artillery and amphibious vehicles. They served as a ground-attack craft.

Huey, also known as the Bell UH-1 Iroquois, was the backbone of US Army combat troops in Vietnam. As early as 1962, Army pilots began installing automatic 40mm grenade launchers, skid-mounted rocket pods, and remotely trainable 7.62mm machine guns in their turrets. During these operations, which assisted helicopter assault operations, the AH-1G HueyCobra, the first purpose-built helicopter, was developed. McDonnell Douglas AH-64 Apache replaced HueyCobra. Apache is a heavily armored anti-armor multirole combat helicopter with an advanced navigator, electronic countermeasure, and fire-control system. They were first deployed in 1986 and proved exceptionally successful during the Persian Gulf War.

Helicopters are available in many sizes and types, ranging from two-person private helicopters to giant passenger helicopters that easily carry massive loads to inaccessible locations. Although all helicopters follow the same principles of flight, the tactics for flying them vary due to the specific attributes of the rotor and control systems. Other vertical-lift air force transport aircraft use controls and tactics similar to conventional aircraft and transport helicopters. While they are a small part of the overall picture of flight, they are becoming increasingly important.

The modernization of the vertical lift fleet is the third top priority of the United States Army, after long-range precision fires and next-generation combat vehicles. The United States Army plans to have an FLRAA (Future Long-Range Assault Aircraft) and a Future Attack Reconnaissance Aircraft on the ground by FY30. In response to the retirement of the OH-58D Kiowa Warrior military transport helicopters, the FARA program will address a critical capability gap currently filled by AH-64E Apache attack helicopters and Shadow drones. The Raider X, a coaxial rotor blade design based on the S-97 Raider, is Sikorsky’s proposal for the FARA project. Bell announced its proposal, the 360 Invictus, at the 2019 AUSA annual conference.

The French and German armies adopted Franco-German Tiger combat helicopters in 2009. Originally conceived as an anti-tank platform, it evolved into a versatile attack helicopter, with many variants produced to meet the needs of its operators. France and Germany formalized the Tiger’s modernization as a new defensive stage for Europe in May 2018. Airbus Helicopters, Thales, and MBDA are certified by the European Organization for Joint Armament Cooperation (OCCAR) to perform risk reduction activities on France’s, Germany’s, and Spain’s behalf. Immediately, all Mk3 units should prepare for joint combat.

The Manned Unmanned Teaming (MUM-T) system, which allows a helicopter to fly a drone, will be included. The French military could exchange intelligence with the new Scorpion-class frontline battle vehicle by using Tigers.

The competition for the Schwerer Transporthubschrauber (STH), or heavy transport helicopter, will satisfy Germany’s military goal of awarding a contract for the rotorcraft by the year 2030. In 2020, the Bundeswehr requested heavy-lift capacity from the industry. Germany’s aging fleet of Sikorsky CH-53 Sea Stallions, currently in service with the Luftwaffe, will be replaced by the new aircraft. The expectation is that the final contract will cover 40 to 60 aircraft valued at over €4 billion.

Hindustan Aeronautics Ltd has begun work on a 10-12 ton attack helicopter that would be ready by 2027, comparable to some of the world’s top medium-lift military choppers, such as the Boeing Apache. To replace the Mi-17 fleet, the Indian Army is developing a 10 to 12-ton helicopter. The platform will be homegrown with a production capacity of 500 helicopters. They will have twin engines and can fold their blades for use on the deck.

Helicopter missions include air assault, air transport, combat logistics, and combat search and rescue. A formidable arsenal of weapons will sit on the chopper. The Mi-17 helicopters are the backbone of the Indian Airforce helicopter fleet, with plans to phase them out by 2032.

In mid-2020, US aerospace giant Boeing will hand over the final five of 22 Apache assault helicopters to the Indian Air Force amid rising tensions between India and China.

As part of the assets, the fleet operates from critical air bases along the Line of Actual Control. Mid-2020, Boeing will also deliver 15 Chinook military helicopters to the Indian Air Force, demonstrating its commitment to meeting the operational needs of the Indian armed forces. The AH-64E Apache is one of the most advanced multi-role combat helicopters in the world. Chinooks can transport troops, artillery, equipment, and fuel vertically. India is one of 17 countries to select the Apache, with the AH-64E Apache being the most sophisticated model