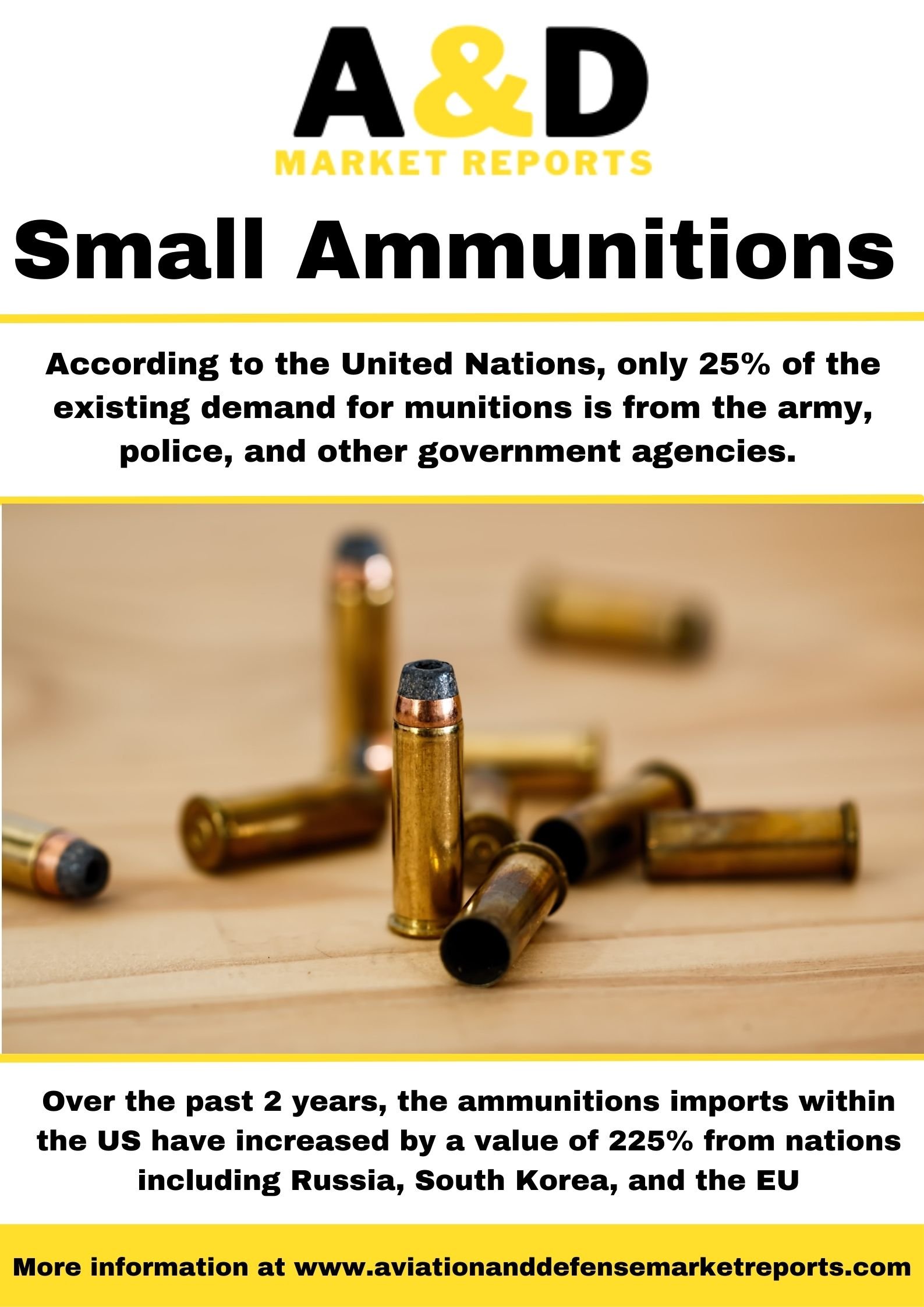 Small Ammunitions are quantified as projectiles that are fired or dropped. Ammunitions follow a projectile motion on being launched from the weapons system. They can be quantified as both expendable weapons as well as components of the technology used to provide momentum. The expendable weapons market includes land mines, missile grenades, and other launch-able munitions. While, the in-built munitions segment includes bullets, warheads, etc. All mechanical weapons require a warhead to cause devastation.

Small Arms are essentially used to provide momentum to ammunitions; they can be quantified as man-portable devices that can propel these projectiles. Some of the key product segments within this market include rifles, MANPADS, etc. The use of this technology provides a projectile-based momentum to the warhead due to which the ammunition can be expended. Small arms are also classified as munitions, i.e. the weapon system.

Drivers for the Small Ammunitions Market

Growth in the usage of the weapon system and ammunition during close combat operations is one of the key drivers for this market. Border tensions between nations have led to the strengthening of the border security forces in these regions. This in turn has led to the increased proliferation of small ammunitions within the weapons technology vertical. The increased hysteria amongst the civilians is another factor that is expected to drive the growth associated with this market. Increased terrorism and the onset of the pandemic are two key factors that have increased the market penetration for the weapons system.

North America is anticipated to be the largest market for small ammunitions owing to countries like the US and Canada. The sales for ammunition recorded an all-time high in the year 2021 due to the pandemic which in turn has led to a supply shortage within this region. The growth in demand is due to the increased indulgence of the population in personal protection, recreational activities, and hunting expeditions. The rise in requirement for police protection across hospitals and other public facilities is also anticipated to drive the demand for this segment.

US-based manufacturers have reported a high production rate for ammunitions, however, several B2C ventures and small ammunitions dealers are experiencing a shortage. An increase in imports for ammunition across the US has been witnessed owing to the sudden surge in demand standards.

As per the FBI’s National Instant Criminal Background Check System database, there were 39.7 Million background checks performed in 2021 based on gun purchases. Roughly 22.2 Million checks were performed solely in the year 2021 thus suggesting a hike in gun usage.

Over the past 2 years, the ammunitions imports within the US have increased by a value of 225% from nations including Russia, South Korea, and the EU.  According to trade-based data acquired from public sources, it is to be noted that a lower percentage of ammunitions exports have taken place from the US to global markets.  In Jan 2020, the number of shipments recorded from Winchester acquired a value of 107. Most of the shipments were to Australia under the contract with the company NIOA. Some of the other export destinations for the US include Belgium and Israel.

Threats posed by the Small Ammunitions and Munitions Market

Misuse of small ammunitions and munitions across the global markets is one of the key concerns to be addressed by the governments and other governing bodies. The growth in violence across the world is one of the key factors that account for this rise in the usage of munitions. According to the United Nations, only 25% of the existing demand for munitions is from the army, police, and other government agencies. The small munitions survey in Geneva stated that roughly 875 Million guns are presently in possession of the general population.

The illicit possession of weapons and the number of personal licenses issued have increased substantially owing to mistrust amongst the community as well as increased security concerns. As mentioned by the United Nations, two key standards to be implemented to reduce the misuse of weapons include the reduction of stockpiling as well as supply for both munitions and ammunition. A small munitions survey indicated that 38% of arms procured by the military are more than the requirements. A charted and subsidized procurement of small munitions and arms is expected to reduce the demand margins. This is also anticipated to reduce the production rates for small arms and ammunition across the global markets.

An ammunitions depot, also known as an ammunitions dump is used by military facilities for the storage of live munitions, projectiles, and weapon systems. Such locations are highly hazardous in terms of fire safety standards. The detonation of munitions within an ammunition depot during transportation, packing, or unloading poses threats to both infantrymen as well civilians surrounding the region. Generally, an ammunitions depot is a large buffer zone to avoid casualties. Moreover, this region is guarded by perimeter security forces to avoid any mishaps.