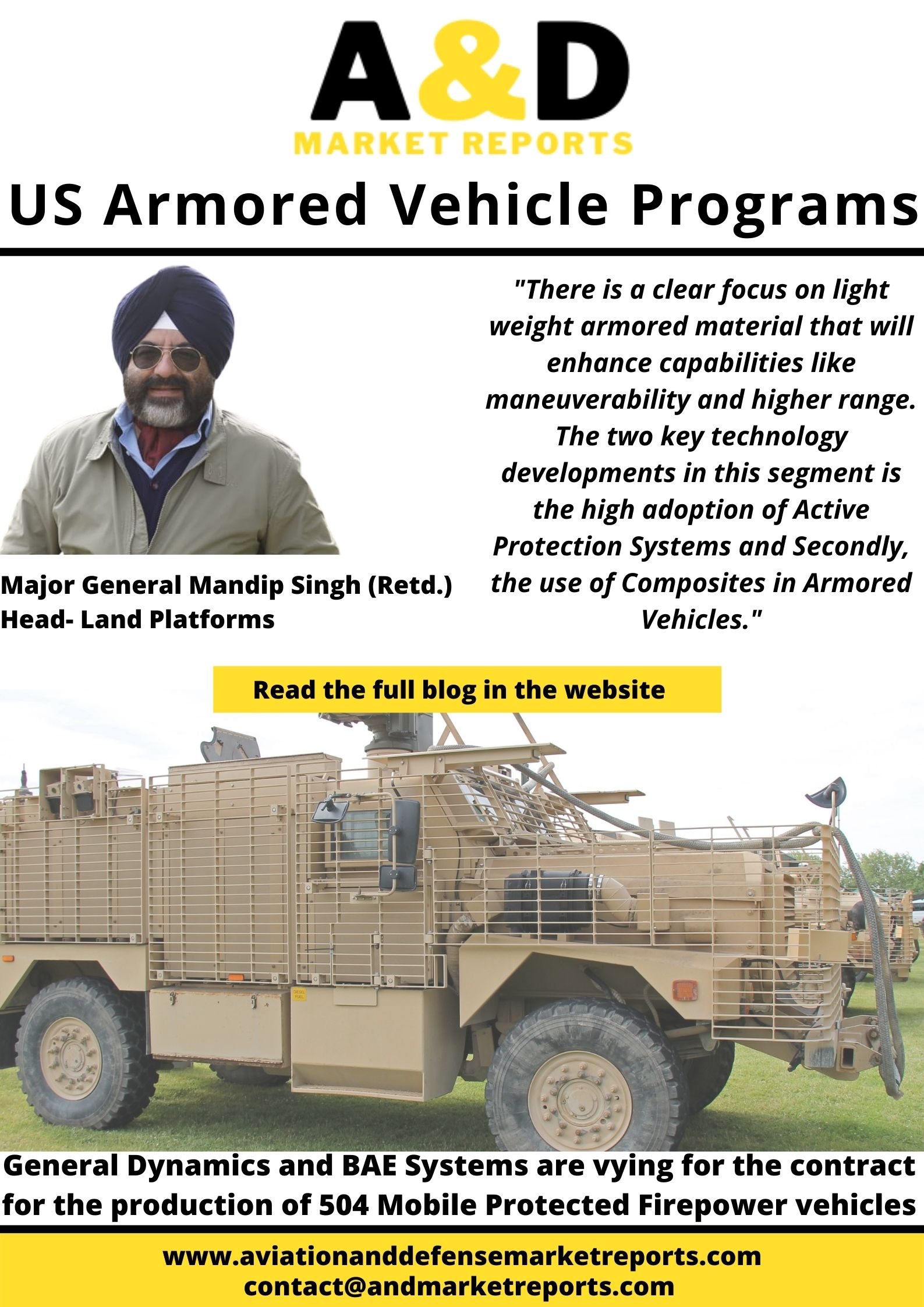 Armored vehicles are designed to undertake combat operations against enemy forces. Armored vehicles can protect personnel from incoming ballistic attacks during operations owing to the presence of a passive protection system in place. US Armored vehicles combat are divided into categories based on their attributes and intended battlefield purpose, i.e. tracked or wheeled.

The US Armored vehicles vertical has a large fleet of vehicles. Main battle tanks, infantry combat vehicles, armored personnel carriers, engineering support vehicles, mobile artillery, mine-protected vehicles, prime movers and trucks, light tactical vehicles, and light utility vehicles are present within the US vehicle fleet. Some of the best armored military vehicles are used within the US market. The introduction of regulations like the NATO STANAG 4569 is expected to increase the lethality of the US Armored vehicles. The best armored military vehicles can be reaped through the introduction of this regulation.

The Marine Corps, also incorporates these vehicles within their forces. However, the vehicles used majorly cater to amphibious warfare. Other military services keep a substantial number of vehicles on hand to transport people and materials, as well as to conduct security and support activities.

Key Programs in the Armored Vehicles US Army

The Optionally Manned Combat Vehicle program is the US Army’s third effort to replace the M-2 Bradley infantry fighting vehicles. The army’s decision-making board re-launched the Optionally Manned Fighting Vehicle (OMFV) program in October 2018. This strategic move was made to expand the number of vehicle programs added to the next-generation combat vehicle NGCV. The introduction of this program is expected to reap one of the best armored military vehicles present globally.

5 Defense OEMs were named as the key contractors for this program. American Rheinmetall Vehicles (ARV) have assembled a team to carry out their project requirements. The project is presently in Phase 2, whilst digital engineering and model-based system engineering techniques are being employed for system integration. During this phase, the contractors are poised to create a digital model that will be tested using physics and operational models to see which capabilities provide value to the project.

The Mobile Protected Firepower (MPF) light tank is designed to serve as an airborne escort for airborne troops and other light formations. The MPF program of the United States Army is intended to provide Infantry brigade combat teams with increased mobility, protection, direct and offensive fire capability.

The Army has set a target of acquiring 504 MPFs, with 14 MPFs per IBCT. The First equipped unit is scheduled to be fielded in Fiscal Year (FY) 2025. The Army plans to award a contract to GDLS or BAE before the conclusion of fiscal 2022’s third quarter. The Army intends to produce 26 vehicles initially, with the possibility of building 28 more and retrofitting eight prototypes.

The Armored Multi-Purpose Vehicle (AMPV) Army program aims to replace M113s with modern vehicles that can perform a variety of duties on the battlefield. The AMPV is superior to the M113 FoV in terms of military protection, survivability, mobility, and power generation. It can also integrate military incoming networks and other future technologies. BAE Systems is the manufacturer of the AMPV. The Army intended to purchase a total of 2,907 AMPVs. BAE will add additional capabilities and technology to AMPVs throughout their lifetime under the newest USD 600 million sustainment deal.

The Joint Light Tactical Vehicle (JLTV) is another military program instated by the United States Special Operations Command. The Army and Marine Corps are working on the JLTV as a replacement for the HMMWV, which has been in service since 1985. It may perform a range of tactical and logistical support duties ranging from: armament carrier, utility vehicle, command and control vehicle, ambulance, reconnaissance vehicle, and more.

Upcoming Programs for US Armored Vehicles US Army

General Dynamics and BAE Systems are vying for the contract for the production of 504 Mobile Protected Firepower vehicles. The US defense budget Army will choose the winning design in 2022, with the MPF’s first operational unit entering service in 2025.

The RCV-L (Robotic Combat Vehicle-Light) is a compact, extensible unmanned combat vehicle developed in collaboration between QinetiQ Group and Pratt Miller Defense to support ground-combat operations. In its FY2022 budget proposal, the Army requested USD 84.45 million for R&D, test, and evaluation (RDT&E) funds for the RCV.

The US Army has contracted GM Defense to produce 639 Infantry Squad Vehicles (ISVs), all of which are diesel-powered. However, the business has developed a one-of-a-kind ISV based on the All-Electric Concept Vehicle, which might pave the way for future light military vehicles.