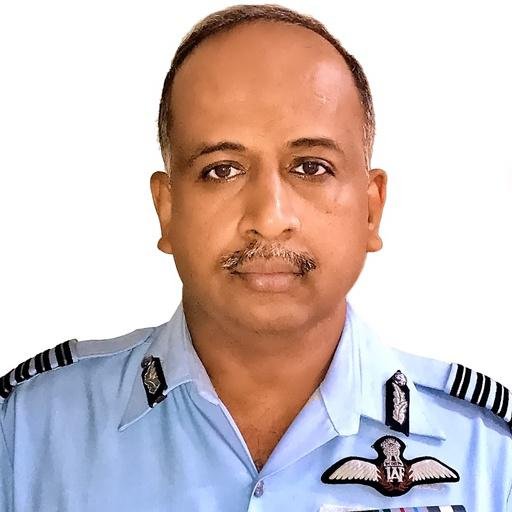 Group Captain MJ Augustine Vinod (Retd.) Vishist Sewa Medal, was commissioned into the Fighter stream in June 92 and retired in 2019. He has flown Mirage 2000, MiG  21, Kiran HPT 32 and Airbus A320 aircraft. He has over 3500 hrs of flying experience on these aircraft.

Education & IAF journey. He is a Flying Instructor. He  is a graduate of College of Air Warfare, where he did his Higher Air Command Course, earned M Phil degree and was retained as an instructor this where he pursued his PhD. He is an alumnus of College of Defence Management where he did his Defence Management Course. He is also  a graduate of Defence Services Staff College, Wellington where he did his M Sc. He is a trained Air Accident Investigator and has done many air accident investigations. He trained on airport development & project management from IIM Shillong & on data structures & UNIX, LINUX from IIT Kharagpur. He commanded a MiG 21 Frontline Fighter Squadron and was boss of operations in an Air Defence and Ground Attack fighter squadron in the western sector.

He was in-charge of Mirage 2000, MiG21 and many other projects in Air Headquarters including Ballistic Missile Defence. He did a stint in Intelligence & Garud. Some of his warplans were adjudged the best by the Chief of Air Staff. He has been commended by Air-Officer- Commanding in Chief twice and was conferred with Vishist Seva Medal by the President of  India in 2015. He is a trained Paratrooper, Sky Diver, a Scuba Dive Master and Deep-sea Rescue Diver.

An Overview into Unmanned System and Unmanned Aerial Vehicle Segments

No one can deny that we live in the autonomous vehicle age. In Central Asia, Unmanned Aerial Vehicle (UAV) operations have killed over 2,700 insurgents, according to a recent study. During the past decade, America’s surveillance drone fleet has grown from 50 planes to more than 7,500, accounting for over a third of the Pentagon’s air force. In reality, unmanned aircraft is the latest in aerial weaponry that delivers more push-­button, bloodless wars. The Unmanned Aerial Vehicle (UAV) segment has witnessed the most number of new entrants, procurements and technology developments in the past decade.

After the Vietnam War, the development of unmanned vehicle slowed down.  In 1982, Israelis used these for more than just surveillance in the Bekaa Valley. In addition, decoys acquire targets and monitor enemy airfield activities over an extended period ensuring Air Force troops are at little or no risk. In response to this experience, funding for unmanned vehicle research and development has increased in the United States. When the Gulf War began, the United States lacked formal specialized unmanned vehicle programs or surveillance drone programs. The fighting involved such vehicles. Marines and the Army have also used unmanned underwater vehicles for surveillance. As a result of this experience, the Department of Defense spent USD 3 billion on several autonomous vehicle projects during the 1990s.

The advancement of information technology, coupled with a reduction in the size and cost of enabling electronics, has led to a proliferation of inexpensive Unmanned Aerial Vehicle (UAV) or drones. Soon, it is safe to assume that the levels of invention and discovery that have fuelled recent expansions of Surveillance drone capabilities will continue. Today even the smallest, cheapest autonomous unmanned vehicle possesses attributes that would make their radio-controlled predecessors envious.

Remotely controlled vehicle and Surveillance drone are examples of autonomous unmanned vehicles that operate without human interference. Surveillance Drone continuously monitor the battlefield, orbit the battlefield, and transmit intelligence to a base station. Typically, they run on two-stroke or rotary chainsaw piston engines. Their sensors usually reside in a turret under the aircraft, and they provide day and night vision. Using a laser designator in the turret, they set the target for smart weapons. Other modules, such as SIGINT packages or lighter synthetic aperture radar (SAR) sensors with all-weather imaging capabilities, are also being developed.

Unmanned underwater vehicle are water-borne vehicles that operate without human controllers on the surface. An Unmanned combat aerial Vehicle can serve as a node in a communication or sensor network, enabling it to serve as a defensive weapon in minesweeping or patrolling as part of a network. Among the military applications of these are border and littoral zone patrol, minesweeping, submarine tracking, ISR, seaborne threats, and offensive capabilities.

Due to the apparent lack of crew, these can carry more sensors and instruments than a piloted craft of a similar size. Equipment such as sonars, cameras, radars, ISR systems, environmental sensors and data loggers, weapons payloads are attachable to unmanned underwater vehicle.

Also, AI integration is providing military applications with more autonomy, especially in autonomous machines and robots. Due to their environmental sensors and artificial intelligence, Underwater and unmanned ground vehicles can operate with little to no human interference. In line with previous developments, autonomous military vehicles are becoming intelligent and compact. Autonomous ground vehicles aid in human safety on battlefields. Several high-pressure tasks have been made possible by these systems, including firefighting, public safety, and the delivery of supplies and drugs to patients in remote locations. In defense applications, they are beneficial because of their small size, enabling them to reach and operate in places where humans cannot.

Dragon Runner 10 (DR-10) is an Unmanned Ground Vehicle (UGV) created by QinetiQ North America. The camera comes with day and night cameras and communication transceivers.  It is controlled by an easy-to-use controller, allowing operators to gain a detailed understanding of the site from a distance. A UGV can deploy remote sensors and set counter-IED charges, making them ideal for the army’s goal of extended tunnel mapping.

As a part of the U.S. Army Combat Capabilities Development Command, the Army Research Laboratory specializes in autonomous vehicle technology for indian army modernization. To achieve this goal, the team is developing a power generator currently used mainly for residential energy production on military vehicles. The research team is testing Stirling cycle generators as propulsion aids for autonomous ground vehicles. The generator operates quietly, is highly efficient, and has low emissions, in addition to having a long service life.

In addition to replacing its aging Bradley infantry fighting vehicles with Robotic Combat Vehicles (RCVs) and an optionally operated vehicle, the United States is actively developing an optionally controlled robotics vehicle. One of these programs received contracts to produce early prototypes of autonomous combat vehicles in two weight categories in January 2020. Both Textron and QinetiQ received orders for their products that are similar to Milrem’s TheMIS system.

One of the most notable examples of an Unmanned Ground Vehicle sought by the Russian armed forces is the Uran-9 manufactured by Kalashnikov. The vehicle served in Syria during the civil war. Another variation, the Uran-6 minesweeper, has also been tested there. Based on the information gathered during the Syrian conflict, Russia is developing a guidebook for the use of autonomous ground vehicles.u