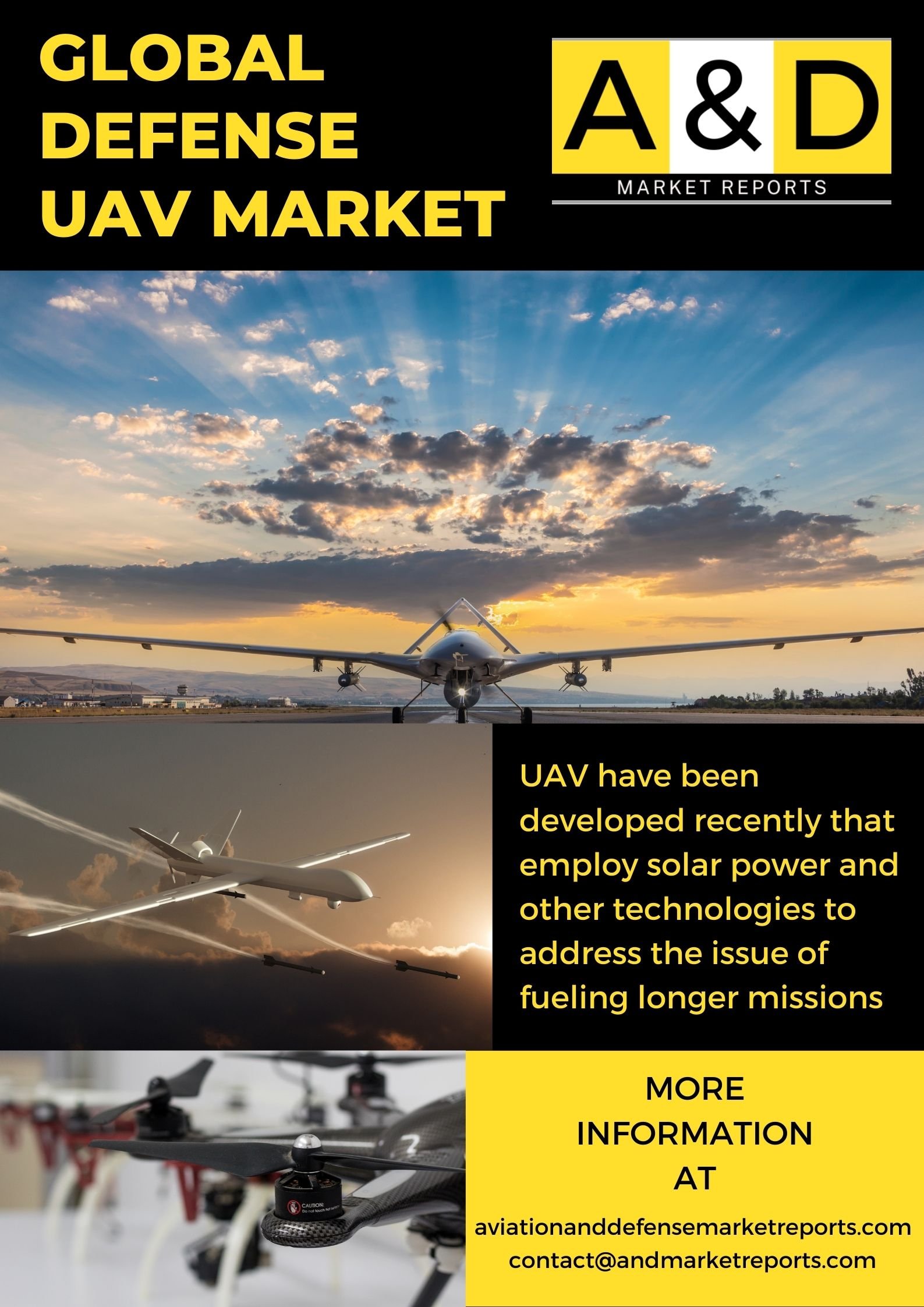 Defense Unmanned aircraft vehicles (UAVs) are planes without a human pilot or other passengers. Defense UAVs (Unmanned Aircraft Vehicles), sometimes known as drones, can be remotely piloted or autonomous. UAVs as a solution for intelligence, reconnaissance, and surveillance missions benefit from Defense UAVs’ (Unmanned Aircraft Vehicles) lengthy loiter times, flexibility in positioning them close to possible targets, and small size and low visibility.

The main benefit of unmanned aircraft vehicles is that they can operate more quickly, precisely, and dependably than human operators.

Currently, in the defense industry available rotary drones are often powered by lithium-ion polymer (LiPo) batteries for electric propulsion. LiPo batteries are lightweight and rechargeable, making them perfect from a design standpoint. Long-distance missions are increasingly being carried out by gas-powered drones. Although combustion motors are less efficient than electric motors, gasoline still has an energy advantage due to higher energy density than LiPo batteries in the defense industry. Unleaded gasoline, two-stroke motor oil, nitro-based gasoline, and diesel are a few probable fuel sources for gas-powered drones. Defense industry suggests that gas motors have not been commonly used in rotary drones since they require a larger, heavier motor and fuel system.

As per defense reports, drones that use hybrid power are revolutionizing the industry and can be either gas – or battery – or battery – and solar -powered. The in-flight laser charging of batteries and hydrogen fuel cells are two further power sources to be mentioned in the  coming defense industry trends. A drone’s ability to stay in the air indefinitely could be enabled by laser recharging, while hydrogen fuel provides a clean and energy-dense power source. As per defense reports, both ideas are being tested at the moment in the defense industry.

A Medium Altitude Large Endurance (MALE) Unmanned Aircraft System (UAS) with a long-range and multiple roles is called the Heron TP. It has completely redundant avionics, autonomous taxi-takeoff and landing systems (ATOL), SATCOM for increased range, and other features. The Heron TP was created as a multi-mission aircraft with the ability to reliably carry out a range of strategic objectives, including reconnaissance, target acquisition, surveillance, and intelligence gathering, for both domestic and foreign customers.

As per defense reports the MQ-4C Triton UAV defense is a force multiplier for the Joint Force and Fleet Commander, improving battle space awareness and reducing the time from the sensor to the shooter. The system offers Combatant Commanders, Expeditionary Strike Group Commanders, Carrier Strike Group Commanders, and other designated U.S. and Joint Commanders multiple-sensor, persistent maritime and littoral intelligence, surveillance, and reconnaissance data collection and dissemination, as well as an airborne communications relay capability. Operators have the flexibility to move through ice conditions because of the inclusion of a de-icing capability over the base Global Hawk. Defense reports state that the MQ-4C Triton UAV defense’s mission sensors offer complete radar and electro-optical infrared coverage for defense UAVs. Defense reports suggest that two low-rate initial productions (LRIP) Lot 5 MQ-4C Triton high-altitude, long-endurance unmanned aircraft vehicles (HALE Defense UAVs) have been ordered by the US Navy from Northrop Grumman Systems Corp. As per defense reports, the UAV defense company received the $248.225 million modification to a previously awarded fixed-price incentive (firm-target) contract from US Naval Air Systems Command (NAVAIR). 65 Tritons will eventually be purchased by the US Navy in the Broad Area Maritime Surveillance (BAMS) program.

UAV Defense Industry for Russia as per Defense reports

The TB-001 combat drone has a length of 10 meters, a wing length of 20 meters, a height of 3.3 meters, a maximum range of 6000 kilometers, and a flying altitude of 8000 meters, with a maximum load capacity of 1.2 tons, three times that of China’s famed Rainbow 4B Defense UAV. It also has a battle radius of 3000 kilometers, allowing it to annihilate an enemy from a distance of 3000 kilometers. Defense reports state that the performance is highly advanced. The UAV defense has an endurance of 35 hours. It can carry several missiles, including the 20-kilogram AR-2 missile, which can be steered in a variety of ways. This missile can be carried on a four-mounted pylon and can destroy ground targets and armed soldiers in the defense UAV.

Defense reports state that medium-altitude, long-endurance (MALE), locally developed Korean Unmanned System (KUS)-FS unmanned aircraft vehicle (Defense UAV) has been successfully deployed. The KUS-FS first flew in 2012 and was created by Korean Air Aerospace Division (KAL-ASD) for the Korean Agency for Defense Development (ADD). In case of this defense UAV With an endurance of up to 24 hours, the locally produced KUS-FS is intended for armed land and marine intelligence, surveillance similar to the US-made General Atomics MQ-9 Reaper UAV defense, KUF-FS UAV defense has a V-tail and a vertical ventral fin. It is said to have a wingspan 25 meters wider than the Reaper and a 1200 horsepower Pratt & Whitney PT6 turboprop engine.