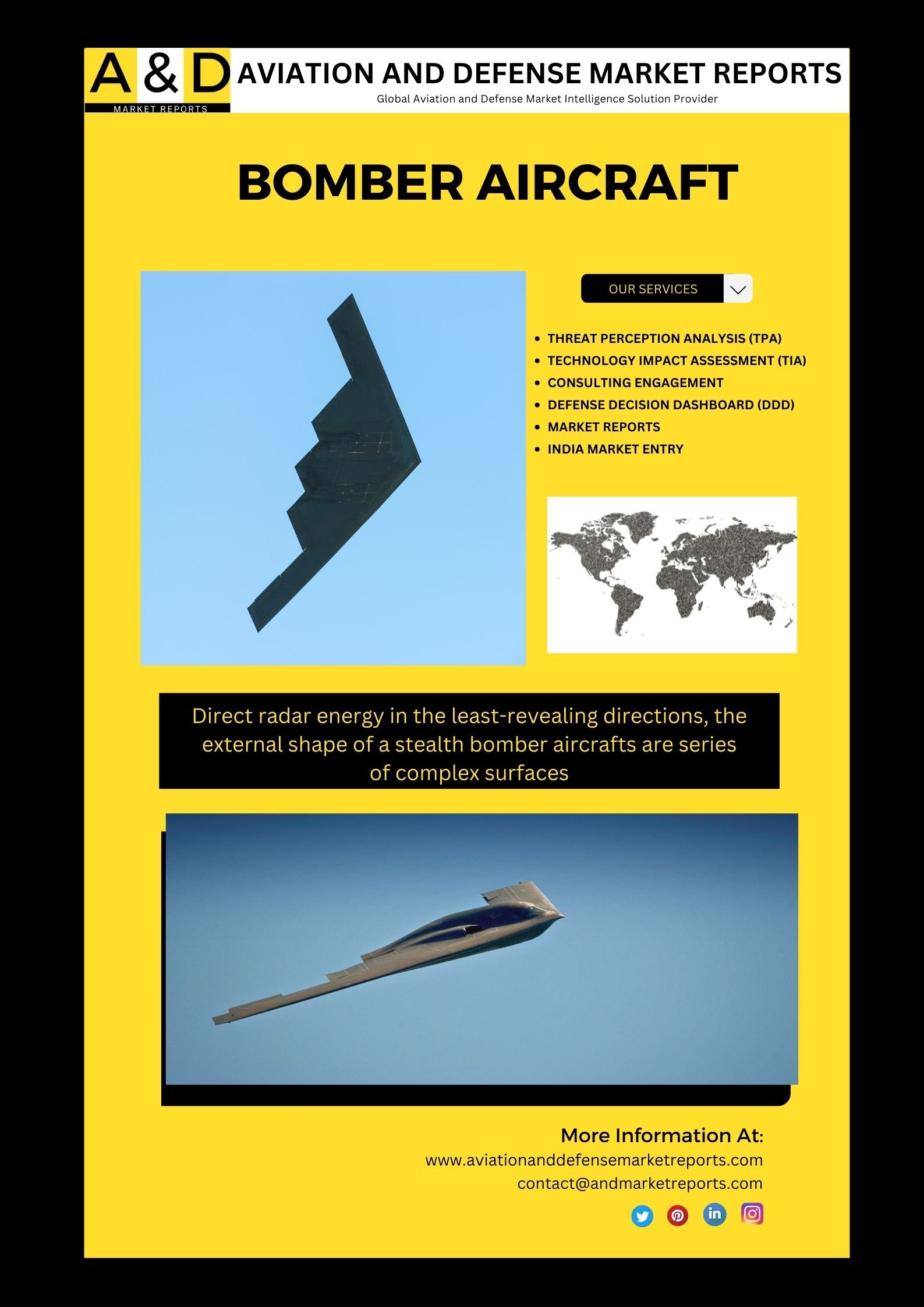 As per Aerospace Aviation and defense market experts, bomber planes are intended to drop bombs on land targets. Bombers had limited defensive weaponry and flew as high as 50,000 feet to dodge fighters and antiaircraft weapons. But, according to A&D market experts the emergence of high-altitude, radar-guided surface-to-air missiles posed a serious threat to bomber planes. At the same time, nuclear-armed ballistic missiles with improved precision were usurping strategic bombers’ role as offensive weapons. The United States and the Soviet Union transitioned to a new generation of aircraft with variable wings. The medium-range F-111 and Tu-26 Backfire, as well as the long-range B-1 and Tu-160 Blackjack, were developed by the two countries. These bomber planes were meant to fly under the radar and can carry a wide range of payloads such as bombs and missiles.

Aerospace Aviation and defense market news suggests that to avoid increasingly advanced radar early-warning systems, the F-117A Nighthawk was developed by Lockheed Martin for the USAF. The F-117A, despite its fighter classification, lacked air-to-air capabilities and instead depended on stealth technology to escape detection by opposing air defenses. As per A&D market professionals, the B-2 Spirit of the United States employed stealth materials and forms to limit radar reflection.

As per A&D market experts, the PAK-DA is Russia’s first long-range strategic bomber aircraft in decades, intended to replace Tupolev Design Bureau’s three stalwarts of the RuAF – the Tu-160 Blackjack,’ Tu-22M, and the Tu-95 ‘Bear’ from the 1950s. According to Aerospace Aviation and defense market experts, the PAK-DA bomber plane will be built along with the improved Tu-160M. The Tu-160’s highly enhanced ‘M’ version first flew in 2021. A&D market news suggests that the modernization program was initiated in 2015. The PAK-DA flying-wing design can stay airborne for 30 hours, fly at subsonic speeds, and has a thrust of around 23 tons. Because Russia has fewer tanker aircraft for mid-air refueling, the Russian PAK-DA is expected to have a longer range than the American B-2 Spirit. A&D market experts stated that the aircraft’s unique characteristic is believed to be the sixth-generation mixed cycle engine, the research and development (R&D) for which began in July 2021 as per Aerospace Aviation and defense market experts.

The operational range of the Xian H-20 stealth bomber aircraft is estimated to be between 4,000 and 5,000 kilometers. The 45-ton strategic stealth bomber could travel great distances without refueling in the middle of the flight. As per Aerospace Aviation and defense market news, active electronically scanned array (AESA) radar is expected to be a critical feature of H-20, allowing it to detect targets, threats, and other hostilities more precisely and to carry a big internal weapon load. As per A&D market experts, the CJ-10K or CJ-20 land-attack cruise missiles, both of which are capable of carrying conventional or nuclear bombs, could also be expected to be carried by it.

Recent Developments as per Aerospace Aviation and defense market news

The Air Force’s proposed budget for fiscal 2023 would increase the $108 million allowed for the B-21’s purchase costs by $1.7 billion. The Air Force plans to continue its EMD phase and invest more than $5.2 billion in the B-21 in the upcoming year as stated by Aerospace Aviation and defense market experts.

China’s H-20 Stealth Bomber aircraft models have appeared online. Shortly, the nation intended to perform a flying test of the impending H-20 Bomber aircraft. Images of a bomber plane model that may be related to the final prototype are currently going viral on social media.

Aerospace Aviation and defense market experts stated that Russia has started testing an ejection seat (PAK-DA). The tests would include resource and climate tests and look at mechanical impacts. This entails determining if the system can resist the intense pressures on the seat while being ejected by rocket boosters mid-flight and whether the structural integrity is maintained. Twelve ejection seats for the first PAK-DA, whose development and mass manufacturing will cost Rubles 500 million, will be made by Russian state enterprises as per A&D market professionals.

India wants to strengthen its strategic force by acquiring Russian Tu-160 bomber aircraft. The fact that this bomber is so dangerous by nature is why America protested its debut flight. The Tupolev Tu-160 bomber has a top speed of 2220 kilometers per hour. The most weight that can be carried by this aircraft while in flight is 110,000 kg. Its wingspan measures 56 meters. The tactical bomber Tu-160 bomber is made in Russia. Because of this, the bomber may launch an attack thousands of kilometers away from its base as per Aerospace Aviation and defense market professionals.

Conclusion as per A&D market experts

Bomber planes in the future are expected to be unmanned, which will help reduce the risk to human life. A&D market trends suggest that with advances in stealth technology, they’ll be able to operate undetected and take out their targets with surgical precision.