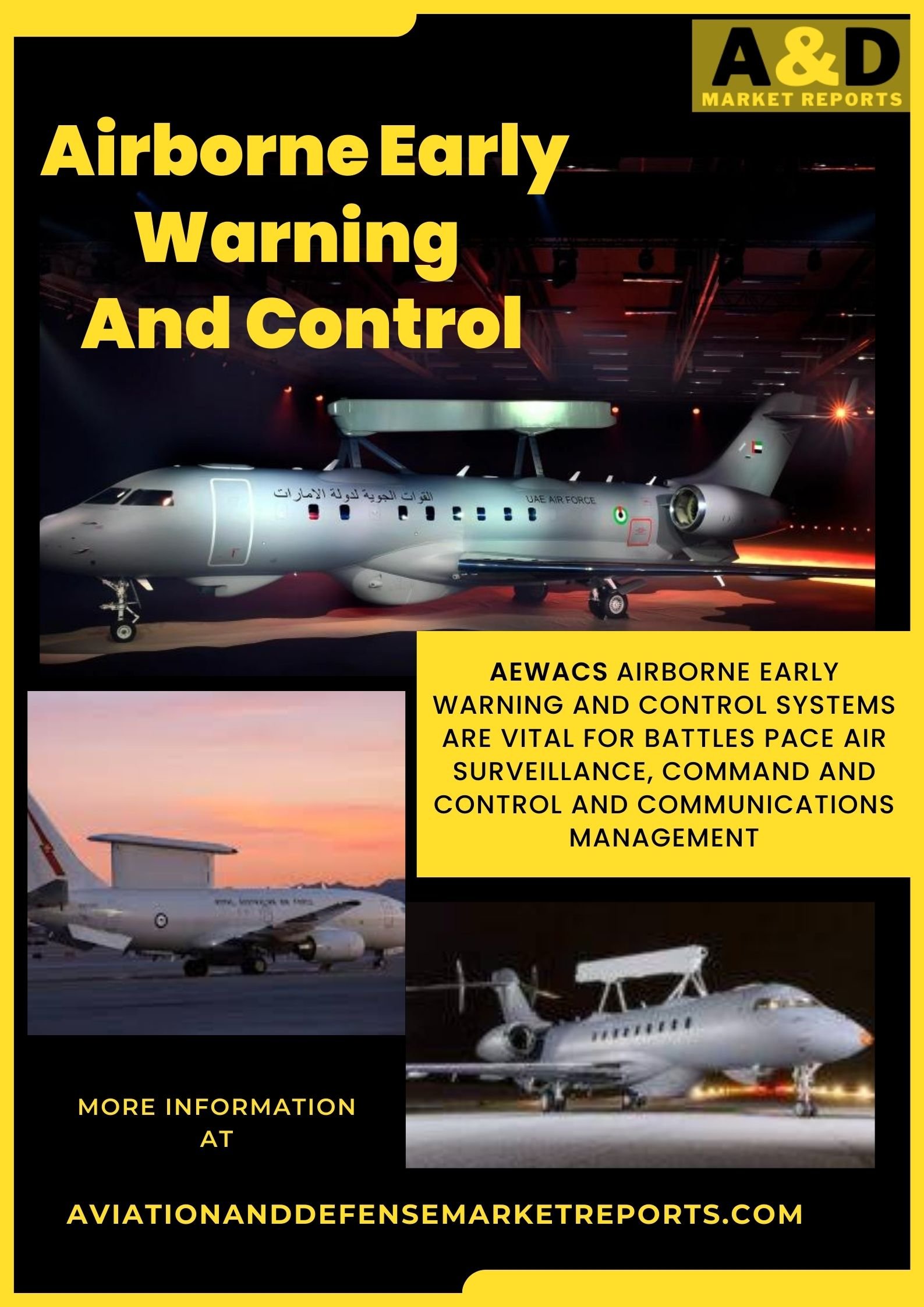 The Airborne Early Warning and Control (AEWC) aircraft collects data from a number of sources, analyses it, and transmits it to all friendly air and surface assets. The Airborne Early Warning and Control aircraft directs fighter aircraft, surface combatants, and land-based elements, as well as supporting aircraft such as tankers and intelligence platforms, in the tactical battlespace. In many Defense and National duties, it acts as a “force multiplier,” boosting the effectiveness of other capabilities. It also allows operators onboard and on the ground to identify, assess, and take action to direct interceptors to those threats for neutralisation. The system is entirely net centric, with complete command and control features that can accept information from ground, integrate, and fuse it onboard to offer the operators onboard with a composite image of the environment. Its role as a command centre allows onboard operators to swiftly select, command, and guide individual interceptor aircrafts towards enemy threats and neutralise them.In 1977, the first production-model AWACS was deployed. The AWACS, designated E-3 by the US Air Force, serves as a command and control centre for Tactical Air Command units as well as command and control activity in the North American Air Defense Command (NORAD). The system is also used by NATO.

The most widely used systems are the Boeing E-3 Sentry and Northrop Grumman E-2 Hawkeye. The Boeing Defense and Space Group (now Boeing Defense, Space & Security) produced the E-3 Sentry, which is based on the Boeing 707-320 aircraft. There were 65 E-3s manufactured, and NATO and four countries employ them. The Grumman E-2 Hawkeye, a specifically developed aircraft, entered service in 1965 and has since been used by eight different countries. There have been over 168 generated thus far, with new versions being developed all the time, making it the most extensively used AEW system. The E-3 technology has been installed in the Boeing E-767 for the Japan Air Self-Defense Force.

In the AEWs, the Russian Air Force employs roughly 15–20 Beriev A-50 and A-50U “Shmel” aircraft. The mainstay is built on the Ilyushin Il-76 aircraft and features a huge non-rotating disc radome on the rear fuselage. These aircraft replaced the 12 Tupolev Tu-126s that had previously served in the position.

Boeing 737 AEW&C aircraft are being deployed by the Royal Australian Air Force, Republic of Korea Air Force, and Turkish Air Force. Unlike the E-2 and E-3, the Boeing 737 AEW&C has a wide dorsal fin instead of a rotating disc radome (rotodome). It will most likely be marketed to existing E-2 customers who would otherwise be forced to buy a system designed for an aircraft carrier owing to a lack of alternatives.

The new airborne early warning and control (AEW&C) aircraft for the Indian Air Force using Airbus jets bought from Air India is under development. Radars will be mounted on the jets indigenously, with a planned 6 aircrafts. In February 2017, the IAF received its first indigenously developed AEW&C system, which was placed on a Brazilian Embraer-145 jet, enhancing its capacity to identify adversary aircraft and missiles. The DRDO created the Netra AEW&C system, which has a range of roughly 200 kilometres. According to the official, the new AEW&C system, which would most likely be installed on the Airbus A321 aircraft, will be more advanced than the Netra system. Two Netra systems are now operational. Three Israeli Phalcon airborne warning and control systems (AWACS) fitted on Russian IL-76 heavy-lift planes are being used by the IAF. The system has a 400-kilometer range.

The IAI/Elta EL/M-2075 Phalcon system, which uses an AESA (Active Electronically Scanned Array) instead of a rotodome antenna, was developed in Israel. The system was the first of its kind to be put into operation. The first Phalcon was created for the Israeli Defense Force and for export, and was placed on a Boeing 707.

The Pakistan Air Force ordered six Erieye AEW equipped Saab 2000s from Sweden for over $1 billion in early 2006. The Pakistan Navy sought three surplus P-3 Orion aircraft to be upgraded with Hawkeye 2000 AEW systems in December 2006, at a cost of $855 million. A memorandum of understanding (MoU) was also signed between China and Pakistan for the cooperation development of AEW&C systems. China has agreed to a $278 million agreement.

AEWC aircrafts will continue to be developed and procured as geo political tensions escalate across the world. The capability of AEWC to control an airspace with critical radar information and command system is a valuable strategic edge for any nation. The development of advanced radar systems will also enhance the capability and operational range of AEWC platforms.