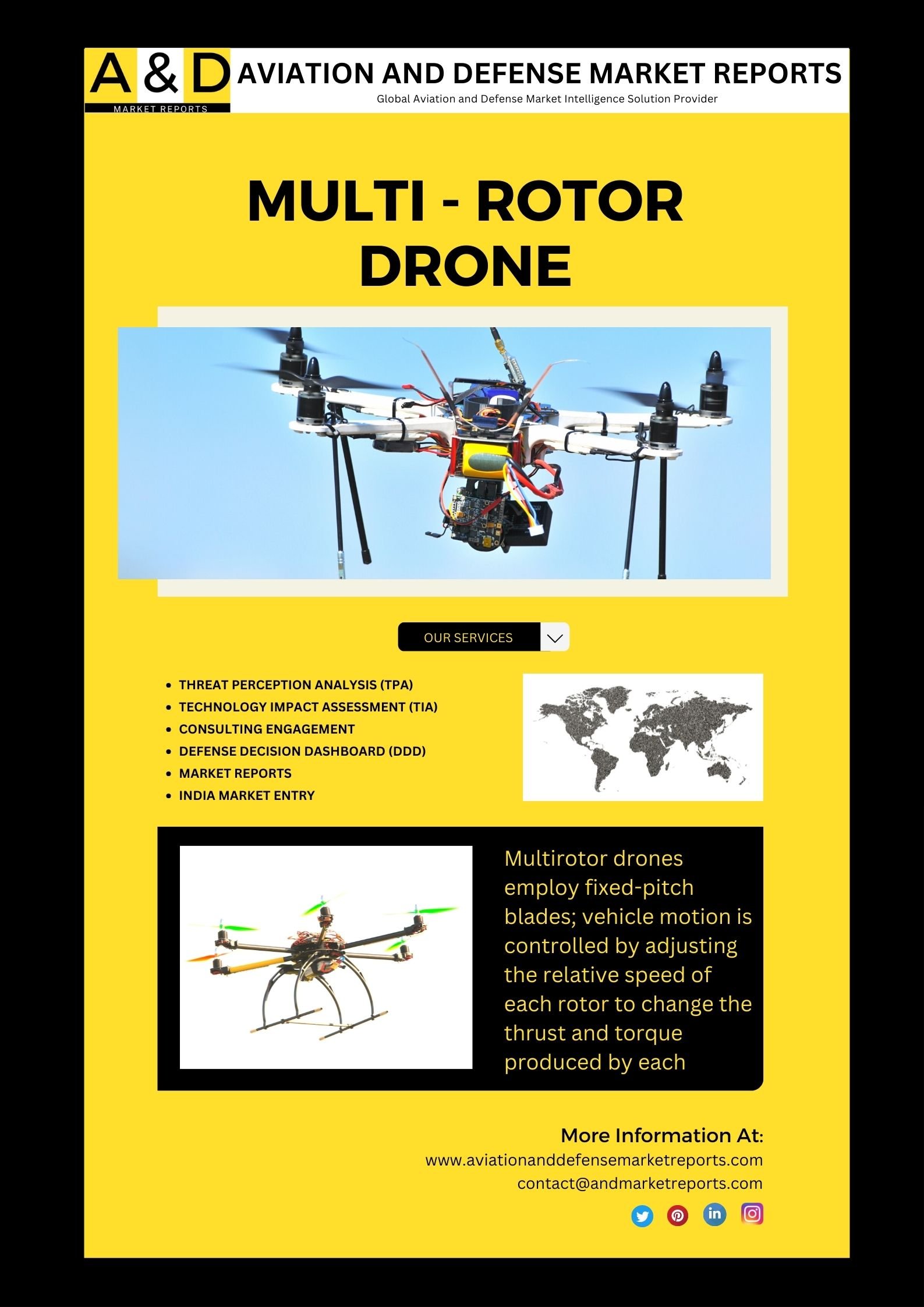 Multi-rotor drones are the simplest and least expensive way to get an eye in the sky. They also provide more control over location and framing, making them ideal for aerial photography and surveillance. They are named multi-rotor because they feature more than one motor. Quadcopters are by far the most popular multi-rotor drones. It can move up and down on the same vertical line, back to front, side to side, and rotate in its axis due to its greater maneuverability. It is capable of flying significantly closer to structures and buildings. The capacity to transport many cargoes every trip improves operating efficiency and lowers inspection time.

The United States Army has chosen Skydio, an American drone company, for its Short Range Reconnaissance (SRR) program, which aims to launch a low-cost, quickly deployable scout drone that can be carried by individual soldiers. Commercially available off-the-shelf drones have previously been employed for these functions, but operational security concerns about the use of foreign-made drones have recently caused the US government to prohibit drone technologies from adversarial countries. With the acquisition of superior American-made drones, it is feasible that small man-portable drones may become regular equipment across the army.

The X2D multi rotor drone can loiter for 35 minutes. With the use of ISR and thermal optics, as well as cutting-edge obstacle avoidance, ease of deployment and autonomy is now a possibility. A soldier’s controller can launch X2D in less than 90 seconds. The X2D’s sophisticated 360-degree camera helps the operator to avoid obstacles and fly at ground level without concern for crashes. The ability of the X2D to fly safely in dense and risky areas, combined with a powerful color and thermal zoom payload, allows it to acquire intelligence swiftly. With skydio x2d, any operator may become an expert pilot in minutes.

In recent years, the U.S. Army has been exploring smaller, hand-launched drones like the Black Hornet or RQ-11B Raven for squad-level deployment. These drones can be deployed by units in the field to provide an on-the-go eye-in-the-sky, providing a quick, low-cost technique of building a real-time image of their surroundings. These small unmanned vehicles can provide exceptional situational awareness and enable novel tactics for scouting for ambushes, improvised explosive devices, or hostile forces on the opposite side of walls or around corners. They also allow for wider standoff distances for special reconnaissance operations, as well as assessing the impact of airstrikes or artillery.

ZALA Aero Group has showcased the latest hybrid unmanned complex ZALA VTOL. The multi rotor drone observes and photographs regions that are inaccessible by conventional military vehicles. It can also generate photographic maps to secure the ground infrastructure of the armed forces. The new craft’s electric propulsion technology allows it to stay in the air for four hours and travel at a maximum range of 200 kilometers. The ZALA VTOL multi rotor drone combines the characteristics of a drone and a tilt-rotor aircraft. Depending on the mission, the flight configuration changes. The ZALA VTOL is equipped with an artificial intelligence computer system that allows it to process data and transmit high-definition photos and video to a ground control station.

IAI has revealed information about a new member of its multi rotor drone family. ROTEM is a tiny, quad-rotor-based loitering weapon and multi rotor drone designed specifically for urban warfare, providing fighters with effective, indirect surveillance and engagement of targets from an elevated position. The lightweight UAV weighs only 4.5 kg and is equipped with an impressive array of sensors, including day and night (IR) cameras for piloting and reconnaissance, as well as multiple acoustic transducers for obstacle avoidance and flight through building interiors, entering through windows, narrow urban streets, or dense vegetation. The battery-powered multi rotor drone can fly for over 30 minutes with a pound (0.450 kg) of explosive payload, or it may be exchanged for a camera and more batteries, allowing it to fly for up to 40-45 minutes. The warhead is made up of two blast-fragmentation grenades with a dual safe and arm mechanism. A single soldier can assemble the ROTEM in seconds after it is folded and carried in a canister or backpack. ROTEM, unlike other loitering weapons, is not always disposable once launched. If the operator does not have the opportunity to engage or abort the operation and decides to collect the drone, ROTEM is directed to land in a safe place with the safe status visible and the warhead disarmed.

The switch is an indigenous fixed-wing vertical take-off and landing (VTOL) hybrid tactical drone developed by India-based UAV company ideaForge. The drone is intended to serve the Indian military and security forces’ most demanding surveillance tasks. It has a longer flight time and can do high-altitude operations with additional fail-safe redundancy for added safety. In January 2021, the Indian Army signed a $20 million purchase with ideaForge for an unspecified number of Switch UAVs. The deliveries are scheduled to be finished by January 2022. The Indian Army chose the UAV following successful flight testing in Ladakh’s difficult terrain and weather conditions in 2018.

The Army has awarded ideaForge a repeat contract to supply 200 of its Switch mini Vertical Take-Off and Landing (VTOL) Unmanned Aerial Vehicles (UAVs) and accessories. The Army had previously ordered the same UAV in two separate transactions.

There will be increasing demand for soldier carried multi rotor drones to dominate urban warfare scenarios. These drones will change warfare in the urban environment forever by enabling quick deployment, the ability to operate in highly contested urban environments, and ISR capabilities.