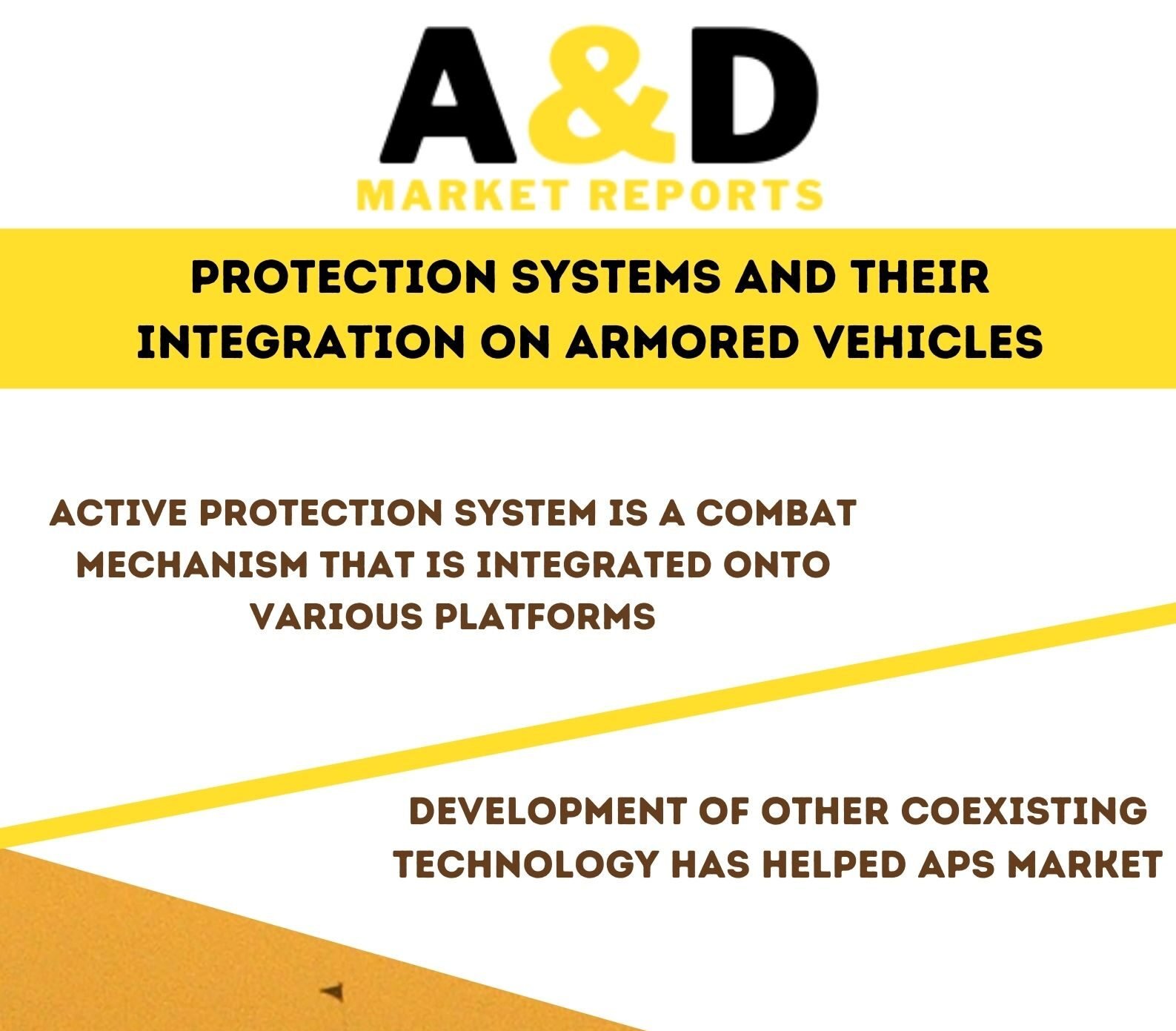 The technology is used in combat operations to increase the lethality of the army and to upgrade the security associated with the personnel who is presently performing military operations.  One of the key technological advances in the active protection systems market is the development of reactive armor. This technology is integrated onto the surface of an armored personnel vehicle or an infantry fighting vehicle to combat incoming threats. Reactive armor is made up of sandwiched explosives placed between two armored plates.

The HEAT jets are disrupted by the penetrator on impact due to the detonation of the explosives present between the armored plates. This in turn damages the long rod penetrators and destroys the incoming projectile.

Active Protection Systems can be classified into two key verticals, i.e. Soft Kill and Hard Kill countermeasures. Soft-Kill Active Protection System-based technologies are used to reduce the radar signature of the concerned platform. The introduction of technologies like stealth is anticipated to be one of the key factors that modulate the growth associated with this market. Soft Kill countermeasures essentially alter electromagnetic, acoustic, or other signatures thus altering the sensing behavior of an incoming target.

Contrarily, Hard-Kill countermeasures deflect or destroy an incoming target by altering or destroying the payload or the warhead. The intended effect of the projectile is obstructed through physical destruction or distortion of the same. Reactive armor is one of the main examples of the use of hard-kill technologies amongst armored vehicles.

In recent years, the increased proliferation of anti-tank guided weapons, unguided shaped-charge weapons, and other low-capacity threats within the ground armored vehicles market is expected to boost the demand for this technology. The inclusion of active protection systems onto ground armored vehicles is expected to decrease the weight of the combatant and subsequently boost its lethality. The modularity of this technology allows it to be integrated across various armored personnel carriers and infantry fighting vehicles. The market relevance and the version of the armored vehicles are some of the key factors that influence the integration of active protection systems onto armored vehicles.

On a regional basis, North America is anticipated to be the largest vertical within this market followed by the Asia Pacific.

The Asia Pacific market is projected to benefit from a rise in demand for main battle tanks, armored personnel carriers, infantry fighting vehicles, and amphibious armored vehicles from growing economies such as China and India. Another cause for rapid growth is the rising expenditure for cost-effective APS technologies. The rise in border tension and counter-insurgency operations performed within APAC is expected to drive the growth associated with this market.

Protection Systems and their Application based Programs

The Icarus program initiated by the UK defense forces is anticipated to enhance the defense capabilities of the UK’s armed forces. The main objective of this program is to enhance the survivability of armored personnel vehicles against Chemical Energy threats. These threats can be in the form of Rocket Propelled Grenades (RPGs) and Anti-Tank Guided Weapons (ATGW). The objective of this program is the development of a Modular Integrated Protection System Architecture.

The Trophy Active Protection System (APS) for the M1 Abrams main battle tanks has been delivered to the US Army by the Israeli company Rafael and the US-based Leonardo DRS. This technology would boost the tanks’ ability to withstand large-caliber rounds. The introduction of these technologies is expected to enhance the lethality of armored vehicles.

The Indian army has also been trying to steadfast their active protection systems market. They have requested bids from local contractors to supply 818 modular active protection systems to improve the survivability of its T-90S/SK ‘Bhishma’ main battle combat tanks. The increased patrolling within the border region owing to the brewing geopolitical tensions between India-China and India-Pakistan is expected to boost the investment in the armored vehicles market.

Israel is another key defense-based economy that has been driving the overall growth of this market. The Israeli Ministry of Defense recently reported that the first round of live testing of the TROPHY active protection system installed on the Leopard 2 tank had been completed. Interceptors, spare parts, operational well as technical training are all included in the contract. The subsystems and training will be delivered over time, with the system integration process expected to be completed by 2023.

The Russian economy also accounts for a key share within the global defense environment. They have approved the new 3VD-35 APS obscurant ordnance from Rostec’s Central Scientific Research Institute for Precision Machine Engineering. Its purpose is to shield armored vehicles from high-precision weapons.