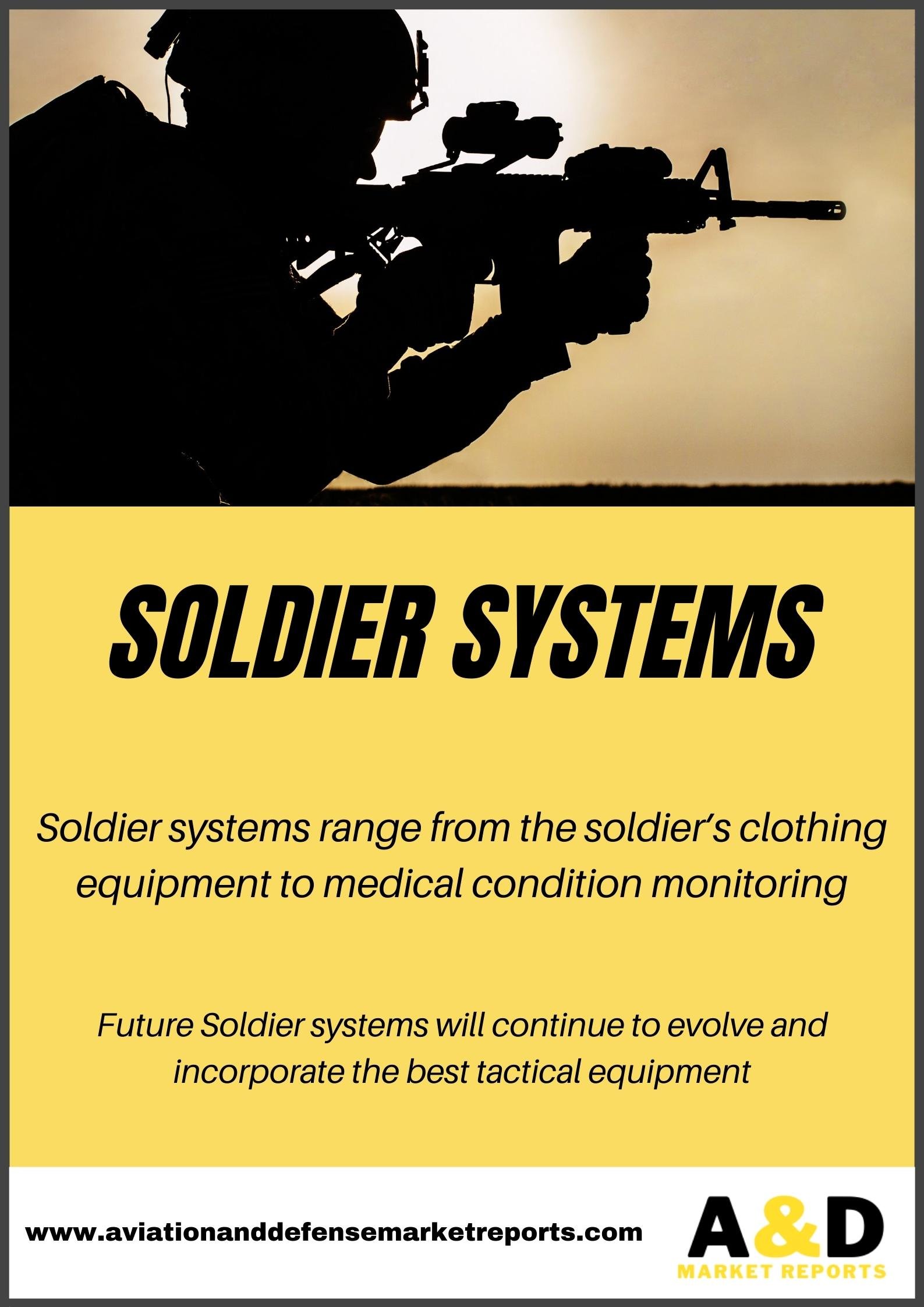 Our Reports
Cotact Us

The command and control module, PDAs, augmented reality goggles, laser designators, clothing, GPS, rifle mounted systems, radio communication, battery pack, and target acquisition and reconnaissance systems are all part of the modern soldier system. The most important factor for a soldier system is Modular Open Systems Architecture. This system ensures quick adoption of technology at an affordable cost. It also enables specific components to be added or removed according to the requirement of the mission. The US Army Natick Soldier systems Centre (NSSC) develops new technology and also advances, assesses, and applies emerging technology.

The command and control module is handled by the commander of the infantry platoon and disseminates mission-critical information to other members of the unit. The information sent by the command and control model is displayed on the PDA carried by unit members. Information such as friendly units, enemy unit location, and objectives. Both command and control modules as well the PDA have low power characteristics and have data connectivity, USB, and Bluetooth. They also have a ruggedized design to withstand harsh operating environments. The command and control module is also a critical part of C4I systems. Gun mounted systems such as LPVO (Low Power Variable Optics) provide 1x-6x magnification and are becoming possible due to the flexibility it offers. Rifle-mounted fire control systems offer precision tracking and targeting capability for assault rifles. Fire control systems have ballistics computers that can track the target and make sure the target is hit. Round counter sends information to the rail-mounted round count display. Smart digital magazines send information to the round counter system which shows how many rounds each magazine contains. It is also ruggedized to suit the harsh operational environment.

A situational awareness system provides the dynamic information needed by the soldier to carry out his mission. The information includes target identification, terrain features identification, navigation information, friend units, and localization of self. It is vital that situational aware systems consume low power and have a low profile to avoid detection by hostiles. Augmented reality goggles help soldiers to see where they are with the help of the heads-up display which overlays a compass and overlays maps of their location. It is easy to use and troop no longer need a paper map and in turn, they use holograms and 3D maps. Apart from these features, the goggles have night vision and thermal imagery capability to aid soldiers to see in the dark. The augmented reality goggles can also send and receive data across a tactical network. UAVs and drone data such as video feed can be sent to the goggle for the soldier to view and vice versa. This feature is critical in the multi-domain battlefield.

The soldier power system consists of a squad power manager. It allows the soldiers to draw power from batteries that they come across on the battlefield. The modular universal battery charger can charge multiple batteries at a time using portable solar panels carried by the soldiers. Soldier power systems are also lightweight and versatile. The latest development is wireless charging functionality, a high-density fuel cell system for increased endurance, power, and data management system. Soldier clothing comprises superior ergonomic design, weight reduction, and optimal performance in hot, cold, and tropical weather conditions. The boots of the soldier are designed to be flame resistant, graduated compression to decrease foot fatigue, reduced friction, and increased comfort. Laser designators are a vital part of soldier systems. Laser designators mark targets for laser-guided munitions. Laser designators are a valuable asset for a covert mission. The laser beam is invisible and operates best under clear atmospheric conditions. The communication system comprises of 4G tactical radio systems, self-forming and self-healing networks. MANET network is formed on the fly and soldiers are moving the network with them without moving the physical infrastructure.