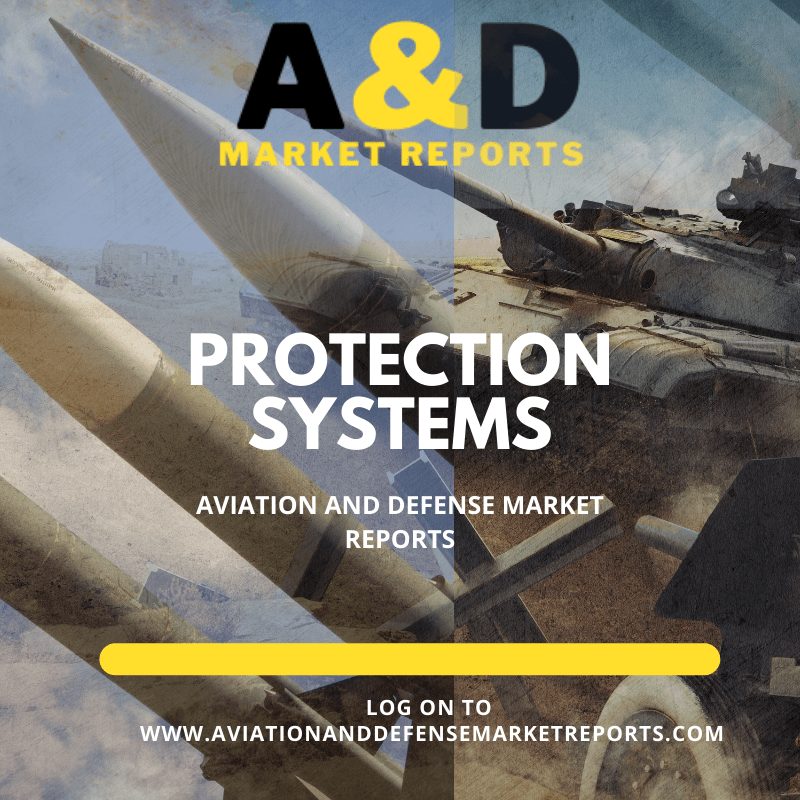 Protection Systems are a niche market within the Aerospace and Defense sector.  They are modular technologies that can be integrated across a range of platforms including land, naval, as well as airborne. The inclusion of this technology increases the survivability of the platforms against incoming projectiles. Various threats including ATGM (Anti Tank Guided Missile), SAMs (Surface to Air Missile), AAMs (Air to Air Missiles), etc can be countered using Protection Systems technology.

Passive Protection Systems are used to deflect or destroy the incoming projectile on impact. The use of passive protection systems ranges back to Early man and his survival tactics. Additionally, before the development of gun powder, cities made use of moats to prevent invasions. The onset of World War II demarcated the introduction of Protection Systems as a distinct market. The growth in German technology and firepower led to the development of counter-attacks and advanced combat tactics.

Armors used across various land, aerial and naval combat systems account for a key segment of the protection systems market. Armored vehicles were first manufactured towards the beginning of the 20th century. The Simm’s Motor War Car was the first armored vehicle. The ground vehicle was armored with 3–3.5 mm thick curved plates of metal. Armors were initially composed of heavy metals. However, in the past decade, a shift in trends is observed from heavy armor to light armor materials.

Presently, material sciences are a key contributor to the growth in the armors market. Lightweight materials are now being devised to optimize the weight associated with this technology. The high weight of the system curtailed the mobility and maneuverability of armored platforms. Therefore, a rise in investment-based research about material sciences is poised to steadfast the growth for this market.

Active Protection Systems can deflect or destroy an incoming projectile. The technology makes use of war ware to increase vehicle survivability. On studying the product life cycle, it is seen that Active Protection Systems can be ranked as a growing vertical. They were first introduced during World War II to counter Anti-Tank Guided Missles (ATGMs).

Active Protection Systems can be integrated across land, naval, airborne as well as unmanned platforms. This technology serves as a non-armor solution that reduces the weight associated with the tactical combatant. Heavy armor cannot be integrated into naval and aerial bodies. Consecutively, Active Protection Systems are used across the naval and airborne platforms.  This is because the technology optimizes the weight of the system as opposed to modular armor.

Active Protection Systems can be further segmented into two key categories, i.e. hard-kill and soft-kill countermeasures. Hard kill countermeasures engage with incoming threats. They are used to destroy the incoming projectiles through means of firepower. One such example is the Russian Made Area. The system makes use of its Doppler Radar to detect incoming threats. The detected signals are sent to a computational device where the threat is deciphered. On threat recognition, the system fires its top attack munition to destroy the inbound projectile.

Impact of Growing Munition technology on the Protection Systems Market

The growing lethality of weapon systems is one of the key drivers for this market. The growth of precision-guided weapons embarks upon supports the expansion of weapons technology.

Combat measures like reactive armor have been developed due to the introduction of shaped charge penetrators. Reactive armor is typically composed of explosives that are sandwiched between two metal slabs. On attack impact, the armor destroys the incoming projectile by disrupting its metallic jet.

Technologies that provide 360-degree protection were developed after the introduction of top attack munitions. In terms of the land system, the vehicle armor is considered to be the thinnest towards the top of the vehicle. This in turn serves as a tactical disadvantage for an armored vehicle against its adversaries.

One such technology that increases all-around vehicle survivability is Hybrid Protection Systems. This technology makes use of both hard-kill and soft-kill tactics combined with some components for passive protection systems. Rheinmetall is one of the OEMs that manufacture this modular technology.