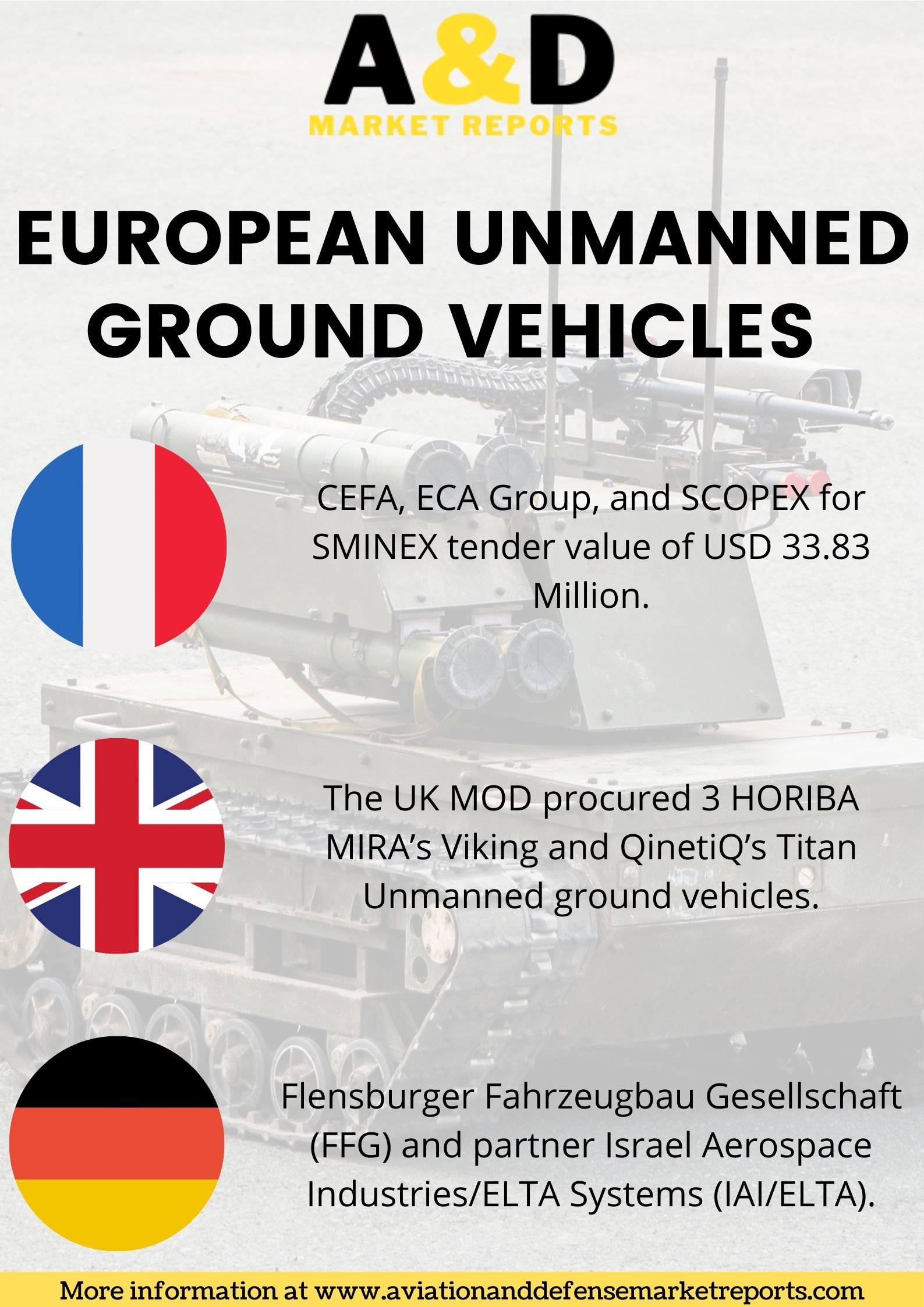 An unmanned ground vehicles functions without the presence of a human operand across land platforms. The proliferation of unmanned technology is one of the key trends within the defense segment. The increased sensitivity and criticality of military operations are one of the key factors that promote the use of unmanned systems. The vehicle is deployed in high-risk missions that cannot be performed by human operators. The use of this technology aids security and provides a boost to the morale of the soldiers.

Sensors account for a key vehicle component within the unmanned ground vehicles market. They are integrated into this land combat platform to gain information about the surrounding area. The information is either relayed to an autonomous system that makes decisions, or to a remote human operand. In remote control missions, the vehicle is controlled via teleoperation.

The rise in geopolitical conflicts and border tensions across global markets is one of the key factors for the growth in investment in Unmanned vehicles. The increased requirement for border security is anticipated to drive the research and development trends within this vertical.

The military unmanned ground vehicles architectural development contract has been awarded by the European Commission to Estonia and the country’s domestic robotics manufacturer-Milrem. The agreement is worth USD 40 Million. A new generation of battlefield ground robots is to be launched via this contractual arrangement named iMUGS (Integrated Modular Unmanned Ground System). The new generation of vehicles is to be based on Milrem’s THeMIS. Some of the other nations that have been active participants within the iMUGS group include Belgium, Finland, France, Germany, Latvia, and Spain. A combined value of USD 2.4 Million is to be generated via the inclusion of these nations in the European Commission’s modernization program.

France is one of the key defense contributors to the European Defense Economy. The country’s defense spending was recorded to be roughly USD 56.1 Billion. On studying the multiplier effect within this market, it is noted that the direct, indirect, and induced employment generated via France’s defense sector is noted to be 400,000 across 5000 companies.

In 2018, France awarded a major contract to CEFA, ECA Group, and SCOPEX for SMINEX tender. The agreement has a net value of USD 33.83 Million. The SMINEX tender is the first project which is related to EOD equipment, this includes individual protection suits, X-Ray systems, Unmanned Ground Vehicles (UGV) handheld detectors, water cannons, etc. As a part of this contract, the ECA group is to supply the French Armed Forces with 15 ground robots UGV IGUANA E. The inclusion of this project is anticipated to drive mobile asset security. These robots are to be deployed to neutralize IEDs (Improvised Explosive Devices). The initial contractual agreement states that the deliveries are to be made towards the end of 40 months from the date of instating. As an extended part of the contract, roughly 43 unmanned ground vehicles would be added to the agreement by the year 2024. The maintenance and repair of these vehicles are also included within the defined bounds of the agreement.

German defense spending is poised to acquire a value of USD 53 Billion in 2021. The country marked an increase of 3% over the year 2020. Germany is recorded to be the third-largest defense-based economy within Europe with net sales of USD 35.4 Billion in the year 2020. Moreover, the defense contribution for the German defense sector is accounted to be 1.53% according to NATO.

Rheinmetall is one of the key defense contractors within this country. The company’s Mission Master is designed for high-risk scouting missions. It delivers a real-time operating picture while increasing soldier safety across highly critical missions. This six-wheeled unmanned vehicle is powered by PATH Kit which is poised to remove the necessity of a human operand amongst land combat systems. Mission Master is presently patented by the company’s Canadian.

The practical tests for ELTA Systems REX MK-II combat Unmanned ground vehicles took place during the study period It is to be noted that Flensburger Fahrzeugbau Gesellschaft (FFG) and partner Israel Aerospace Industries/ELTA Systems (IAI/ELTA) are the key contractors for this program. The unmanned system is to support dismounted forces within the German military forces.

The UK is another key economy that has accounted for a major segment of the unmanned ground vehicles market within Europe. UK MOD’s Dstl (Defence Science and Technology Laboratory) has launched the project Thesus to research the potential use of autonomous unmanned vehicles for resupply operations. In 2020, the UK MOD procured 3 HORIBA MIRA’s Viking and QinetiQ’s Titan Unmanned ground vehicles.