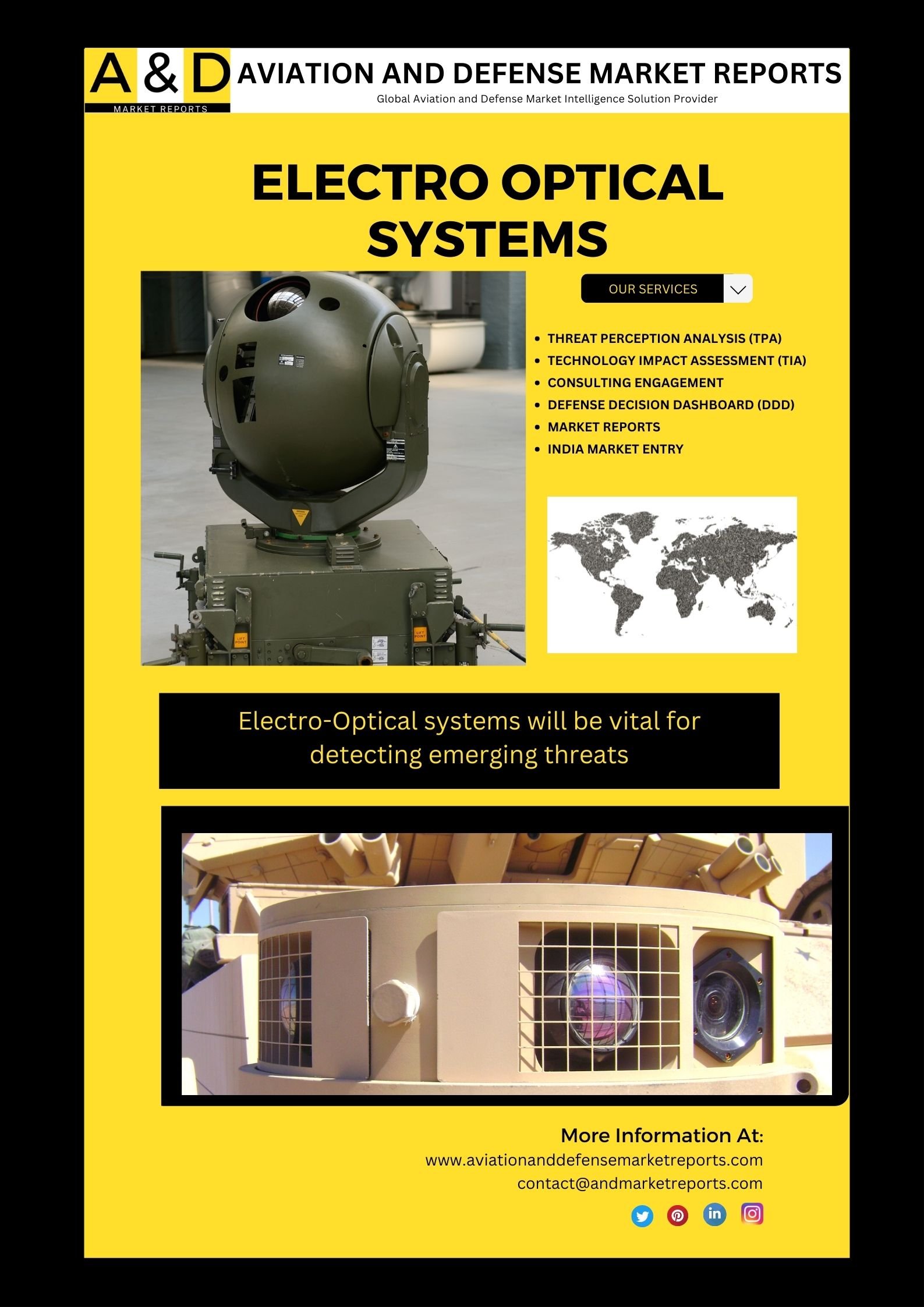 Long-range imaging capability and picture stabilization are critical elements of electro optical systems. Electro optical systems and sensors are typically installed on aircraft or vehicles, employed at sea, or carried by hand, and must be able to recognize targets, track moving targets, and assess threats from a distance and in harsh environmental conditions. Airborne homeland security, combat, patrol, surveillance, reconnaissance, and search and rescue are all common uses for electro optical systems.

The need for defense forces to be able to precisely detect and track hypersonic missiles has intensified due to recent geopolitical changes and the appearance of new weapons that can travel at hypersonic speeds. The US Missile Defense Agency (MDA) commissioned Northrop Grumman to develop the Hypersonic and Ballistic Tracking Space Sensor (HBTSS) prototype to detect heat signatures to locate and track missiles from their initial launch through interception. According to Defense Market Reports, the program will deliver the HBTSS prototype in 2023.

The National Reconnaissance Office, which produces and runs observation satellites for the United States government, issued a solicitation seeking off-the-shelf solutions to assist demonstrations and studies to help decide how it can use hyperspectral imaging in the future using advanced electro optical systems. Commercial imaging and detection technology are in high demand, and its utility has been shown during the conflict in Ukraine when satellite data from imaging businesses give specifics about hostile movements.

The ARGOS-II HD electro optical systems and the EuroNAV control and assessment software comprise the reconnaissance system. HENSOLDT will pre-integrate these fundamental elements, which will be supported by QinetiQ intelligence, surveillance, and reconnaissance (ISR) services and training for national and international JTAC clients and DA62MPP aircraft operators.

MissionGrid is a mission system that can be used on fixed-wing aircraft, helicopters, and unmanned aerial vehicles. According to the firm, it is utilized for border protection, search and rescue, marine patrol, law enforcement, and asset protection, in addition to air and naval forces. The reconnaissance system has a range of up to 40 kilometers and can detect ships, small inflatable boats, and individual swimmers day and night, as well as in bad weather. A thermal imaging camera records the images and transmits video and data to ground-based base stations in real-time.

Astra Rafael Comsys Private Limited, a joint venture between India’s Astra Microwave Products Limited and Israel’s Raphael Advanced Defense Systems, will expand its existing business line by developing, manufacturing, integrating, customizing, and supporting Electro Optic (EO) systems in India. This new product line of electro optical systems will allow the JV to participate in India’s $600 million EO systems market over the next 5 to 8 years. Airborne EO systems for Laser Designation and Recce applications used on fighter aircrafts, which were previously obtained through global bids, can now be manufactured, modified, and maintained in India as part of the AtmaNirbhar effort by the Astra Rafael JV collaboration.

The Ministry of Defense has signed an agreement with Bharat Electronics Limited (BEL) to retrofit the commander sight in 957 T-90 combat tanks. A commander sight is a multi-sensor electro-optical system designed to provide a stabilized panoramic sight for many weapon stations on wheeled/tracked armored and infantry fighting vehicles (IFV). It is worth noting that the T-90’s Commander Sight is now fitted with an image converter (IC) tube-based sight for night viewing, and the retro-modification will improve the capabilities of recognizing targets at longer ranges.

Shtora-1 is an electro optical active tank protection system or suite meant to interfere with the laser designator and laser rangefinders of approaching anti-tank guided missiles (ATGMs). The system is installed on Russian T-80 and T-90 class tanks, as well as the Ukrainian T-84. The Shtora-1 EOCMDAS (electro-optical counter-measures defensive aids suite) is one of several distinct features that distinguish Russian MBTs from the rest of the world. It was introduced in 1988 by VNII Transmash in St. Petersburg in collaboration with Elers-Elektron in Moscow. This system effectively protects an MBT from two types of ATGW: wire-guided missile systems and laser-guided ATGMs. Shtora-1 is made up of a unique computer/control panel, two electro optical interference emitters on each side of the cannon, four laser sensors on top of the turret, and racks of anti-laser smoke grenades.

Existing air-defense systems and standalone equipment are inadequate in detecting UAVs advancing into restricted airspaces due to their tiny size, low operating altitude, and speeds. For detecting, tracking, and identifying drones, a combination of systems that can detect electromagnetic and radio frequency (RF) emissions generated by communication between the drone and its remote controller, as well as reflection of microwaves, infrared, and visible light using optical instruments, is required.

The threat of drones being employed by terror groups, renegade elements, or foreign states has grown exponentially as technology has advanced. Terrorists have used miniature drones to infiltrate crucial airspace. Several government organizations and private enterprises are testing Beyond Visual Line of Sight (BVLOS) operations for drone-based goods delivery. Given the increased usage of small drones in a variety of applications, the DRDO’s electro optical systems will be critical in the future years to protect a nation’s airspace.