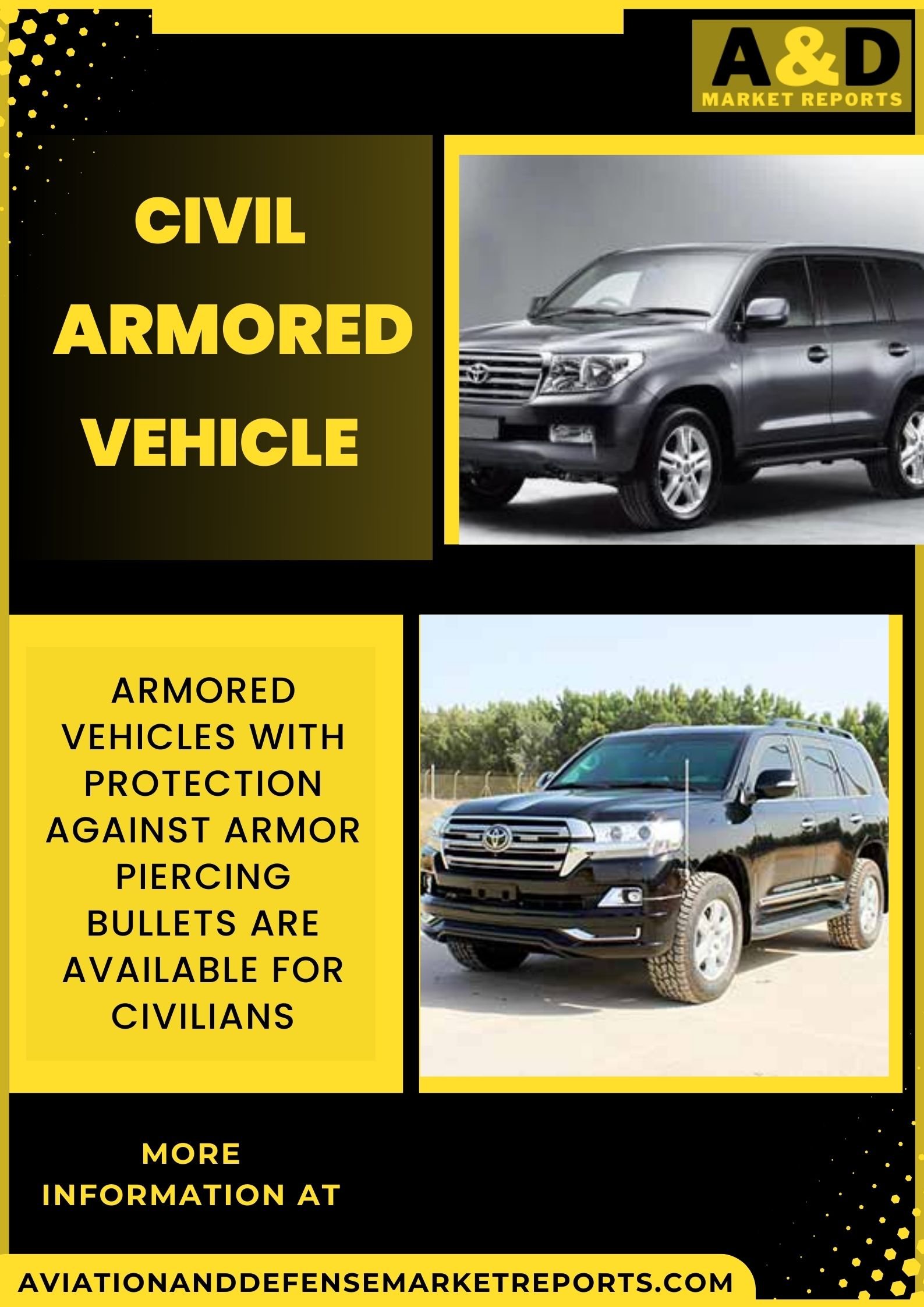 An armored car is also known as a civilian armored vehicle. These vehicles are designed to protect the end-users from blasts, bullets, and other potential incoming threats. Civilian armored vehicles are generally manufactured with bulletproof glass and layers of armored protection. The use of this technology is poised to develop a sense of security amongst civilians during adverse conditions. These cars were predominantly used by VIPs and other high profile individuals initially, however, the proliferation of this product amongst the upper-middle-class population has also been increasing as per Aerospace aviation and defense market reports.

The transportation of different kinds of goods is expected to be another factor that is poised to bolster the demand for armored vehicles. The bullet-proof Ford Transit Cargo Van is popularly used by marijuana transporters across the US.  The vehicle is also popularly used across several dispensaries as well as provision centers. Armored cars were also considered a good option for the transport of COVID-19 vaccines. Thus the demand for armored vehicles is noted to be particularly high within the healthcare domain. The rapidly growing production of vaccines and their increased rate of distribution amongst the population is considered to be one of the key growth factors for armored vehicles within the logistics domain as per Aerospace aviation and defense market reports.

Commercial Armored vehicle market include vehicles are rated using two key international standards, i.e. American Standard (NIJ Standard 0108) and Euronorm Standard. The Euronorm standard of classification bifurcates the levels of protection by B3, B4, B6, and B7. Vehicle conformity to B3 and B4 standards suggests that the vehicle protects against incoming threats from handguns with a caliber of up to 0.44 Magnums as per A&D market. B6 and B7 levels of protection offer protection against 30.06 Armor Piercing (AP), and hand grenades. Both, B6 and B7 levels of protection are mostly provided by a system in the commercial armored vehicle market built from hardened steel coated with strong synthetic fibers.

The cost of the systems in the commercial armored vehicle market also varies with the type as well as the level of protection. An OEM that manufactures a B6 rating system in the commercial armored vehicle market marks up the price by roughly USD 1.3 Million as compared to a conventional model. Contrarily, retrofit manufacturers offer the same model at USD 50,000 in addition to the cost of the base vehicle according to A&D market.

Another key driver for the market is noted to be an increase in the percentage of high net worth individuals across the global markets as per A&D market.  The increased growth rate associated with developing economies is also a factor that is poised to accelerate the adoption of high-end vehicles like civilian armored cars. On studying the overall market stance, it is noted that the number of ultra-high net worth individuals in India increased by a value of 9.3% between 2021 and 2022. The increased growth rate suggests an overall increase in earning capability and spending potential amongst the Indian population. A 70% increase in civilian armored vehicle sales was noted between 2004 and 2014. The sales volume recorded for the year 2014 was noted to be 28,000 units, i.e. roughly 18% higher as compared to the year 2013.