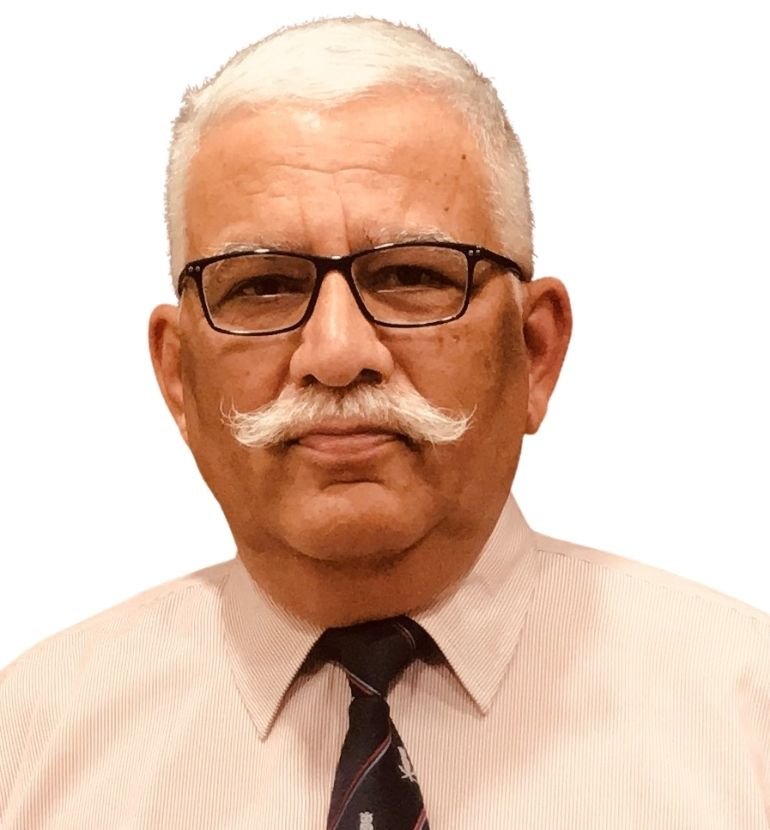 Air Marshal PP Khandekar AVSM (Retd) is a Post Graduate from NITIE Mumbai and holds a Master’s in Defence and Strategic Studies. He has 6 years of teaching and training experience in a Military Aircraft Technical Training School. He holds 2 years of training experience each in Air Force Technical College and the College of Air Warfare (CAW), a Tri-Services training centre for senior and select defence officers.

Additionally, he served two years in the Tri-Services institute MILIT, Pune in the capacity of Commandant and Director of a DRDO Lab.

In the above tenures of over 10 years, in all or part, apart from teaching he had direct involvement in the following. He was involved in the design of training courses, authoring Training Notes, Syllabus formation, Conceiving and Fabricating Training Models and preparing case studies and role-play. He was a part of the Academic Council Meeting and Interaction with Universities for Award of Degrees like Mphil and M Sc Tech. He has authored three books and is a Fellow of AeSI, IETE, IIIE and CENJOWS.

He was also involved in ISO Certification, Simulation for Exercises, and 3-D Printing of training models. Subsequently, he oversaw procurement and maintenance of ship simulators including computer animation and war games exercises. Currently, a Board Director at PAWAN HANS and an adjunct faculty at NIAS Bangalore.

An overview into Training & Simulation Segments

During times when they are not in action, the military undergoes training. Hundreds of thousands of service members are safe from loss or injury due to the military’s ability to practice and train with high efficiency and effectiveness in recent conflicts. For high-tech platforms and systems to operate safely and effectively, people need to be well-trained. Simulated defense training reduces the value of the platform or weapon system due to poor operational effectiveness. As a result, simulations are becoming an essential part of defense training since running actual equipment is too hazardous, and simulated equipment produces better results in terms of training quality.

Typically, when we refer to military simulations today, we are referring to computerized simulations. The air forces have historically been the primary users of computer-driven simulation in the military, with training devices available for the earliest flying machines. Simulators have become so ubiquitous and realistic in defense training that they are now common and used across all services.

The air force teaches flying, practices combat tactics and mission rehearsals, often linking simulators with other aircraft and ground assets to practice their missions. Simulation helps to develop and test the skills of air traffic controllers, ground-based maintainers, and emergency personnel. Techniques and technologies have become equally valuable for remote operators with the advent of drones and other UAVs. Specifically, laser-based training systems to improve combat skills for land forces. Simulations assist soldiers in developing driving, shooting, and tactical skills.

When on the water or port, the Navy teaches equipment maintenance on simulators as well. Weapons training system operators, damage controllers, and navigators receive training using ship simulator above and below the surface. The web-based training in critical areas like logistics and security. Special force training has become common, and the military has been a leader in developing defense gaming for training, also called “serious games.”

Various technologies and applications fall under the category of simulation. It ranges from whiteboards, through part-task and desk-top trainers, to immersive head-mounted displays, to integrated simulations that are barely distinguishable from their real-world counterparts.

Historically, the military and defense industries dominated simulation development due to high research and development funding. Currently, the entertainment industry leads in many niches. Recently, it appears that Virtual Reality (VR), Augmented Reality (AR), and Mixed Reality (MR) have emerged for recreational use, are becoming increasingly valuable and viable to use in defense training. The increasing fidelity of these Extended Realities (XR), coupled with the accessibility of hardware and software tools at an affordable price, has made training applications possible. The XR technologies have enabled 95 percent of training requirements to be met without the need for expensive, fully representative hardware, saving training executives between one and five percent of the cost of live training.

The current and future importance of XR simulations in defense training makes it worthwhile to explain the differences between various types of immersive reality. The VR immerses people into a completely virtual environment, sometimes employing all five senses (taste, sight, smell, touch, sound). The AR overlays virtual content on top of the actual world, but it does not interact. The concept of MR is the production of new environments and visualizations in which physical and digital objects coexist and interact in real-time. XR encompasses all three immersive reality types (AR, VR, MR).

It is not the ship simulator itself that improves skills but rather how it can be employed. In recent years, military training solutions have become proactive in assessing the training needs and selecting the best training technologies for the military. It is to support the training objectives and expanding the training envelope utilizing the devices. The advent of AI and the integration of AR/VR and cognitive neuroscience will allow more complex and challenging simulations in defense training.

Simulator video games are a diverse super-category of video games designed to mimic real-world activities. It attempts to imitate various real-life situations for different purposes such as training, analysis, prediction, or entertainment. Most defense gaming plans do not have clearly defined goals, with the player instead free to manipulate characters or environments as they please. Games such as war games, business simulations, and role-playing simulations are well-known examples.

A military simulation, also known as a war game officially, illustrates war theories without engaging in actual combat. Although military simulation develops tactical, strategical, and doctrinal solutions, critics claim the conclusions drawn from such models are inherently unreliable. It is due to the approximate nature of the models used. As war games are generally considered civilian hobbies, many analysts prefer the term simulation.

The degree of realism of simulations vary. As simulations have evolved, they have widened to incorporate more than just military factors; political and social factors have also become part of realistic war games simulations in recent years. The government often tests and refines military and political policies by modeling. Ship Simulator military activities range from field exercises to abstract computer models that can proceed without the involvement of humans, such as the Rand Strategy Assessment Center (RSAC). Generally, the most reliable data comes from actual observations, and the most reliable theories depend on them. Military analysts also look toward live field experiments as reliable sources of data that are realistic and verifiable. It is not always appropriate or even feasible to conduct large-scale military exercises. A significant factor is the availability of resources, including money. Furthermore, a real-world method of verification cannot apply to all warfare models.

It is often more convenient to test a theory with fewer individuals instead of conducting an exercise on the ground. It is possible to execute a mapping exercise without physically moving troops by senior officers and planners. Considering the human aspect, these still keep a few uncertainties that make warfare challenging to model, but at a lower cost and increased accessibility. Moreover, mapping exercises require far less planning than a full-scale deployment, making them an excellent choice for minor simulations.

The ideal military simulation provides repeatable, measurable results verifiable by observation of actual events. Stochastic simulations, in particular, are used in a way that aims to predict desirable outcomes. The ship simulator user must always keep in mind that they are only an approximation of reality and, therefore, only as accurate as of the model itself.